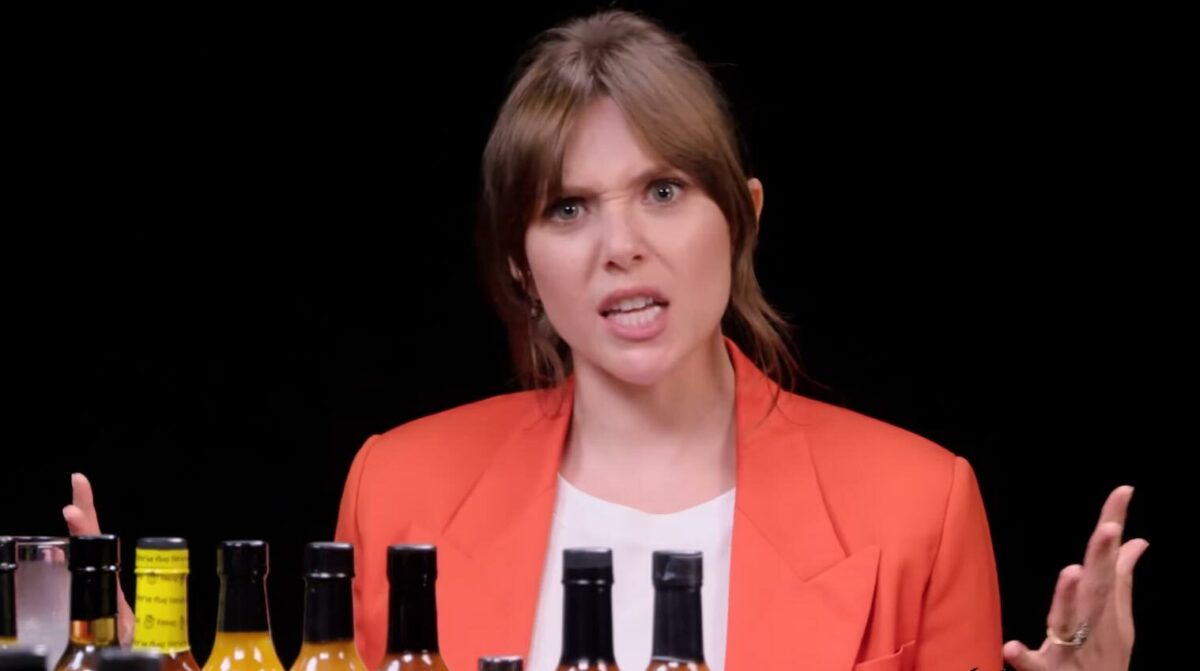 Fans of Hot Ones know how fun the show can be, mainly because we get to see even the biggest stars out there cry because of hot sauce. Whether it is watching your favorite celebrity lose their ability to answer questions being asked of them because of how hot it is or seeing who can handle the Da Bomb with ease, the show has some of the best interviews out there, and it is all due to host Sean Evans and his ability to learn things about these stars. It also helps that he jumps in with the hot sauce journey.

In a new episode with WandaVision star Elizabeth Olsen, we got to see Olsen in her element: on a food YouTube channel. Having been on many of the classic channels, this is the first time Olsen is doing the tried and true Hot Ones’ challenge, and it did not disappoint! From talking about how different WandaVision was from other projects, her experience with Silent House, and more, she was the Lizzie Olsen that fans love to watch in these kinds of interview situations. (I need to make a clip of her talking about having her finger on the pulse of the internet because again, Lizzie Olsen and I are the same person.)

The best part of the video comes at the end, though. Typically, host Sean Evans tells his guest to tell the camera what they have going on. The idea is that you promote your movie or talk about what’s coming up. For Olsen, she could have talked about WandaVision being on Disney+ or talked about the upcoming Doctor Strange in the Multiverse of Madness. But, instead, she had maybe one of the most relatable reactions.

currently obsessed with elizabeth olsen completely misunderstanding the assignment that this is the part in hot ones where you’re supposed to promote your work and she just said she’s having fun in new york pic.twitter.com/KB83jud8n0

Spending time in “New York Citaaay” and “feeling brave” and “feeling strong” is honestly how I spend all my days. It’s hilarious mainly because she clearly just forgot what was supposed to happen and Evans doesn’t help her. Instead, she’s trying to figure out where the camera is for a good while. But, much like Lizzie Olsen, I also will play with the heat choice when I start ordering food at restaurants.

And as Tessa Thompson said:

This moved me much https://t.co/K2h7dFGg2y

What Elizabeth Olsen’s Hot Ones did was confirm that we’d be best friends if we hung out. Just chatting about things, eating wings, and talking about superheroes. And if she can handle the Da Bomb with that much ease, we all can, right? Probably not. Lizzie Olsen is the Scarlet Witch, after all.

(image: screengrab from Hot Ones)