The situation in Egypt has gotten a lot more dire today, and some expect that things will only get worse tomorrow. Following reports that Twitter, Facebook, and BlackBerry Messenger service had been disrupted, reports are now issuing forth that Internet access has been shut down throughout Egypt.

According to Seabone, one of Egypt’s major ISPs, no traffic was going into or out of the country as of 12:30 local time; Arabist.net reports that service providers TE Data, Vodafone, and Egynet are all down across the country.

Web intelligence firm Renesys provides the following chart showing a dramatic spike in withdrawn Internet prefixes around 22:34 UTC (12:34am Egypt time), asking, “What happens when you disconnect a modern economy and 80,000,000 people from the Internet? What will happen tomorrow, on the streets and in the credit markets? This has never happened before, and the unknowns are piling up.” 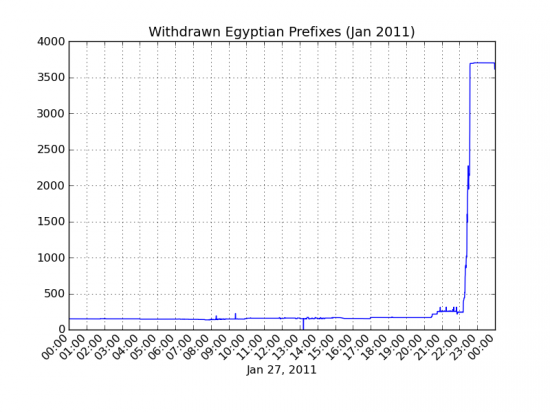 This as YouTube, Flickr, and Twitpic, to the extent anyone has been able to get Internet access in Egypt, show escalating violence. As RWW gloomily notes, the “Egyptian interior ministry’s ‘decisive measures‘ [announced against people who continue to protest against the government on Friday afternoon] may be code for ‘massacre’ now that the Internet’s largely dark.”

Our hopes are with the Egyptians.