The How and Why of the Egyptian Protests 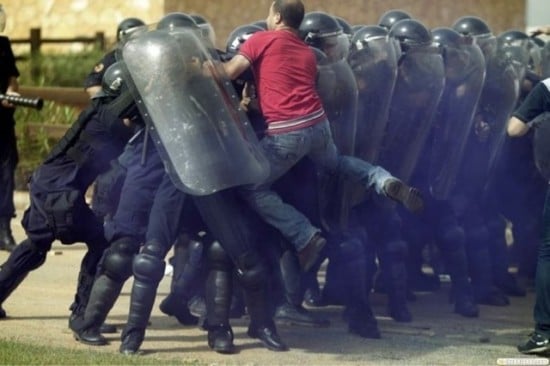 Since Tuesday, Egyptians have taken to the streets to protest the government of sitting President Mohamed Hosni Mubarak, and the Internet has played a key role in organizing them. Through postings on Twitter and Facebook, protest organizers urged Egyptians to come out in a show of support against the current government, urging others to join them.

For many protesters, Facebook has served as a rallying point for action. From the NYTimes:

One protester, Ramy Rafat, 25, said he lived in El-Marg, an impoverished neighborhood in north Cairo. Mr. Rafat, who has a master’s degree in petroleum geology and is unemployed, said he learned about the protest on a Facebook page for Khaled Said, 28. Mr. Said’s family says police officers fatally beat him last year.

Twitter also played a role in the protests, though its effects may have been noticed more by those outside of Egypt as it spread news of the demonstrations around the world. Users were encouraged to send news related to the protests with the #jan25 hashtag, the popularity of which has surged since early Tuesday morning. Many outside the country simply used the hashtag to categorize news coming from Cairo, but apparently it was used on the ground in Egypt to organize and move the protests as the police cracked down.

All the while, recordings, cell-phone videos, and pictures have trickled onto the Internet.

As teargas and rubber bullets started to be brought out against the protesters, the Egyptian government apparently began taking steps to limit electronic communications coming from within Egypt. Twitter confirmed yesterday through @TwitterGlobalPR that the popular microblogging service is blocked in Egypt.

We can confirm that Twitter was blocked in Egypt around 8am PT today. It is impacting both Twitter.com & applications.

Reports that Facebook is blocked in the region continue to arise in coverage of the protests, though Facebook has not commented on the matter.

In the absence of consistent communications, one Egyptian turned to Reddit as a platform to ask for support from those outside of Egypt. Redditor Callmeces has posted a running chronology of events as they unfold, but also a list of what the protesters are hoping to accomplish. By all accounts, the movement is loosely organized and draws from a large ideological base that is upset with Mubarak’s government, making these “demands” hardly comprehensive and surely note representative of all protesters. It is, however, an interesting insight into the motivations behind the protests.

The first point likely refers to the recent parliamentary elections, which NYTimes reporter Mark Landler called “judged less honest than elections in 2005.” To the second point, sitting Egyptian President Mubarak first came to power in 1981 after the assassination of former President Mohammed Anwar El-Sadat. An “emergency law” was put into effect the same year, and has been renewed ever since despite urges from other governments to allow them to expire.

Since his assumption of power in 1981, President Mubarak has remained in office for nearly 30 years. He is currently in his fifth term, a fact that is certainly behind the third point.

The fourth point calls for an increase to the minimum wage, which Al Jazeera reports has remained fixed at $6.30 USD a month since 1984. This, in the face of rising costs in the region and food shortages in 2007. Reddit poster Callmeces proposal of 1200 local pounds would raise that wage to $205.73 USD, though the poster does not cite a rate for that pay.

The last point speaks to the Minister of the Interior, Habib Ibrahim El Adly. The Interior Ministry is the organization that announced a ban on public gatherings earlier this week, and has also been implicated in the government’s crackdown on reporters.

The protests and the Egyptian government’s violent response put the U.S. government in a problematic situation. Egypt has been a staunch U.S. ally, and Cairo was the location of President Obama’s speech early in his presidency where he spoke of the importance of connecting with the Muslim world. Egypt is also the first and only Arab government to declare maintain peaceful, open relations with Israel. In the context of the ongoing Arab/Israeli peace process, Egypt is often seen as a linchpin to success, and a populist uprising could change that.

In addition to the protests in Egypt, the U.S. is dealing with the recent removal of President Zine El Abidine Ben Ali, a corrupt dictator but a staunch U.S. ally, from power in Tunisia and the election of a new government in Lebanon which is likely to be closely aligned with Hezbollah, a militant and political organization which the U.S. government views as a terrorist group. To say that foreign relations in the region are strained would be an understatement.

Twitter, Facebook, and other websites have come to prominence in recent years for their role in fomenting and organizing political activities. Though a key piece of recent U.S. elections, these sites showed their new roles to the world during the 2009 election protests in Iran and have continued to play large roles in politics ever since. Where that role goes from here is uncertain, and may force web companies to choose how much they want their products involved in international relations. The future of politics is surely digital, but digital might not be ready for it.

(image via Ahmed Shokeir via TwitPic)