Editors’ Picks 7/06: Spelunking Through Soulmanure with No Less than 17 Buttons | The Mary Sue

Editors’ Picks 7/06: Spelunking Through Soulmanure with No Less than 17 Buttons

This week in Editors’ Picks: Gaming mice with enough buttons to make a four-function calculator insecure. Spelunky, the rougelike platformer for people who hate themselves. And Stereopathetic Soulmanure, arguably the best kind of manure. Arguably.

James’ pick: Computer mice with no less than 17 buttons

I’ve had a Razer Naga for around one year, and have always coveted one ever since it first released. When I finally splurged and bought the 17-button behemoth, it was one of the best gaming decisions I have ever made. Logitech just recently sent me a review unit of their G600 gaming mouse, which has 20 buttons. Even though the G600 mouse is shaped much differently than the Naga, and is also much larger overall, I feel confident in saying that everyone who performs any sort of computer gaming or advanced computing needs a bunch of extra buttons available at their fingertips. Both the Naga and G600 have different profiles users can switch between, which are different presets for all of the buttons. The G600 even comes with a third button sitting to the right of the standard right click, that when held down, shifts the 12 buttons on the left so you can technically make those 12 buttons have 24 different options.

You might think all of those extra buttons take a while to get used to, but I’ve found that, on both mice, it took me only a few hours before I could navigate the beasts without looking. It helps that both the Naga and G600 have little grooves and raised dots so you can find your way around. You may not think you need a bunch of buttons on your mouse, but after you set up a bunch of hotkey commands on your mouse, you’re computing experience will become much more efficient, and now your extra hand can stop having to put down that sandwich you’ve been trying to eat while accessing all of your Photoshop tools or character’s hotbars.

In truth, I’m still mostly playing Dwarf Fortress, but I’ve also been cutting that with a little but of Spelunky. I have to say that game looks pretty promising. Looks pretty promising? Why “looks”? Well, after a few hours of play, I’ve yet to get any further than the first world, but that world is pretty sweet. 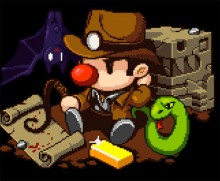 Let me clear this up a little. Spelunky is a roguelike adventure platformer. You search through randomly-generated levels collecting cold, rescuing damsels, killing snakes and bats, and trying to survive. That last one also happens to be excruciatingly hard. When you lose one of your 4 hearts, it’s extremely rare you’ll ever get it back. Instead, you’ll find yourself dying, cursing the screen, and starting from scratch, but in a freshly generated level. That may sound awful, but in fact, it’s what lends the game a lot of its charm.
Because dying will sometimes set you back hard, living becomes all the sweeter. Finding the perfect item in the shop and having just enough money to buy it feels like a miracle, surviving a poorly thought-out fall without taking any damage is suddenly a delight. You start being very stingy with your items, and while it can be a horrendously stressful experience, that’s its draw. It’s kind of like an alternate world Super Meat Boy, where dying makes you want to scream, but for completely different reasons. In short, like Dwarf Fortress, losing is fun. There are, I’m told, various worlds to explore in Spelunky, but so far I’ve been happy in the first. Hopefully by the time I get to the next one, I’ll have liberated myself of so many of the horrible habits that are getting me killed all the time. 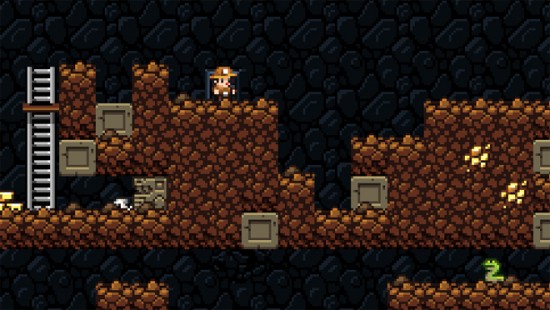 It’s free for Mac and PC, and a flashier version is on XBLA for fifteen bucks.

Yeah, yeah: I know I already picked a Beck album as an editor’s pick. But this is different! First off, it’s from 1994. Secondly, it’s fantastic.

Stereopathetic Soulmanure starts with the astonishingly jarring “Pink Noise (Rock Me Amadeus),” which is full of fuzzed guitars, heavy bass, and the dweedling bleeps and bloops that the people who have listened straight through to the end of Mellow Gold might already be familiar with. It then drops into a moody country tune, “Rowboat,” which is just drenched in slide guitar and has enough bona-fide country in it that Johnny Cash later covered it. But even here, Beck’s bizarre lyricism lets you know you’re still in weird territory.

These two songs show the dichotomy that the album rocks back and forth between. One minute a thrashed-out nonsense mix, the next a plaintive ballad played on a jukebox in an abandoned bar in another dimension. It captures the two poles that Beck’s music of the period orbited, before he narrowed his sound down to the slick production it is today.

In between tracks are man-on-the-street recordings of some dude singing songs, and taped audio diaries that make little to no sense. He praises Ozzy Osbourne.

You could say that it’s an album of its time, but it feels a lot more like a transmission from another world. Folk music from an asteroid, or something like that. It’s funny, it’s weird, it’s challenging, but it defines itself and the strange place it comes from so well. And while I may not wish that Beck still made this kind of music, I really do wish someone was still willing to climb down this bizarre musical well.