This week in Editors’ Picks: Solid-state drives do you a solid by being awesome. So.cl (pronounced “social”) is Microsoft’s new bizarre social network and proof that you can just arbitrarily decide how things are pronounced. And rats. But really, rats.

I’m currently undertaking a horrible project wherein I’m (with the help of a friend or two or five) building my first Linux box. I’m using Ubuntu 12.04, and since it has been a learning experience and we still haven’t been able to get the video drivers to play nicely with Linux, I’m not editorly picking Linux just yet. I am, however, going to suggest the solid-state drive I put into the box. My 128 gigabyte Crucial SSD is the first SSD I’ve ever used, and the increase in speed is instantly noticeable, to the point where I was surprised because I didn’t think I’d actually notice. Sure, SSDs are more expensive than regular hard drives, and hold less data per money spent, but if you know you don’t need multiple terabytes of storage space, and want to be able to access and load all of your things noticeably faster, I couldn’t recommend an upgrade to an SSD more.

Everybody has a social network these days so it’s really no surprise that Microsoft wants in on that sweet, sweet action too. Their soldier on this little Internet battlefield is a network called So.cl (and pronounced “social,” somehow) and centers around the idea of “social search,” something that’s about as intuitive as it sounds. Before I go any further, let me just be absolutely clear: So.cl is weird, hard to use, and super useless, which is exactly what makes it so fun.

Like any social network, So.cl is all about making posts, the weird thing is that those posts are all about searches, and your searches are posts. That’s right, if you search “monkeys” it shows up as  “[name] searched monkeys” on the public feed. Crazy, right? You can also create posts by aggregating multiple results from multiple searches into a weird, auto-generated collage that is invariably awkward looking and therefore hilarious. Bottom line, So.cl is awful but in a really hilarious way. It’s a little hard to grasp, so let me leave you with an example. I call this one “flakes.”

Over the years I’ve had the distinct pleasure of meeting several domesticated rats that were kept as pets. Unfortunately, these happy little creatures don’t have the same kind of broad acceptance that other pets like cats, dogs, and even birds have. Though I can understand an initial aversion — millions of years of evolution is hard to beat — interacting with these clever, social animals is really eye opening. Putting aside the baggage rats carry as a species, these are among the most inquisitive and social rodents. They love to play, are often full of personality, and they actually return the affection you give them — more than I can say for some hamsters that I’ve met.

I won’t tell you to run out and get some rats this instant, since getting a pet is a deeply personal decision. Instead, I’d ask the next time you’re confronted with someone’s pet rat that you gently rub it behind its head, and seize the opportunity to make a new friend. 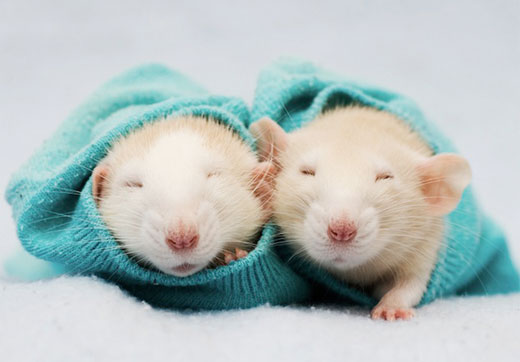