This week in Editors’ Picks: Despite you what you might think, it’s good to get into The Trenches, well, a certain part of The Trenches. Your soon-to-be-favorite ice-cold upper to start the day, and another ice-cold-downer to kick back with at night. We’re into beverages here at Geekosystem.

James’ pick: The posts from The Trenches

A joint venture from Penny Arcade’s Jerry Holkins and Mike Krahulik, and PVP’s Scott Kurtz, The Trenches is a webcomic with a continuous story that focuses on fictional characters working as game testers. The thing is, the comic is only alright. Sure, the art is fine and there’s a good joke here and there, but the real gem of The Trenches is the accompanying post. Unlike most popular webcomics that take the time to write a comprehensive post that accompanies the comic, including what goes down over on Penny Arcade, the posts on The Trenches are user submissions of (usually) horror stories from the game testing industry. They’re extremely captivating, but in the way that a car crash is. Morbidly fascinating. After reading the highly entertaining posts, you gain a new respect for the people that make sure the game you just bought works, and if you didn’t already know, you certainly learn that working as a “person who plays video games for a living” is more like a living hell.

Some of you may already know this, but if you don’t, allow me to blow your mind: Iced coffee does not have to be hot coffee that’s cooled off. I didn’t know that until last week. Up until then, my evening ritual involved hot brewing coffee, and throwing it in the fridge for cold, half-conscious gulpage the following morning. As it turns out, you can brew coffee in cold water. The process takes much longer, but the result is just awesome.

So to cold brew, you basically just mix grounds with room temperature water and let them steep for hours, I usually opt for 24. Then, using a french press (my preferred method) or just filters, you strain it like any normal coffee. The result is a stronger, yet less acidic tasting liquid which seems to pack a strong caffeine punch and a very strong, persistent, but not unpleasant flavor. I find the best ways to drink it are 1:1 with milk (cold-brewed coffee is robust enough that its flavor won’t get washed out) or 1:1 with water, with just a little bit of salt. Sounds bad, is good.

If your coffee drinking habits are regular and ritualized enough that you can plan out everything ahead, I highly recommend you give cold brewing a try. It’s great.

For me, it’s not really summer until there’s a balmy evening breeze and I have a Bell’s Oberon in my hand. For the unaware, Bell’s Brewery is a craft beer maker from Michigan. They have many fine beers — Two Hearted Ale (which until recently name-dropped Hemingway on the label), Cherry Stout, and their Third Coast to name just a few. However, Oberon is the king of summertime.

For a wheat beer, it’s surprisingly flavorful but not overwhelming. There’s a touch of spiciness to give it warmth, but the overall experience is refreshing and flavorful. It walks a good balance between being refreshing, without being watery or bland. The perfect accompaniment — and the ONLY way the beer should be served — is with a slice of orange dropped into your pint. Trust me. And if they try to give you a lemon, send it back.

Part of what makes Oberon special is that it’s only available for the summer months. It’s the kind of thing you look forward to in the deepest depths of winter, and what you get achingly excited for when the trees start to bud, and bitter cold winds are replaced by spring storms.

Sadly, Bell’s distribution set up means that it’s pretty hard to get Oberon out here in NYC. My parents brought a 12 pack around a few weeks back, and there are only three left. I plan on savoring them as summer really gets going. 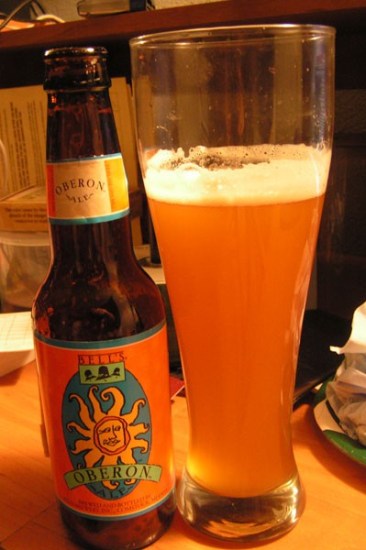