We were shocked -- SHOCKED -- to learn not everyone likes our opinions. 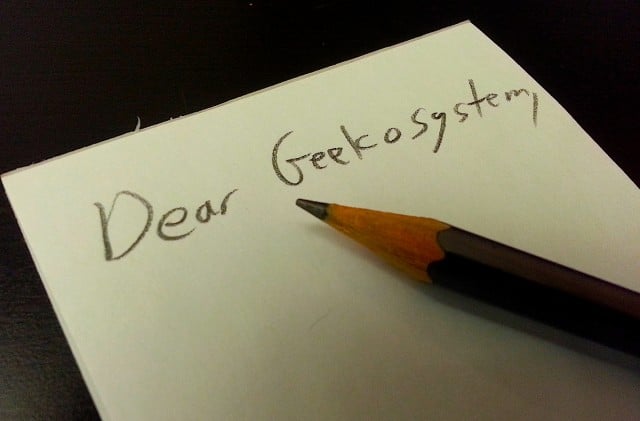 Yesterday morning we received an email from reader Brad M. titled “Some Feedback A Long Time Coming…” it was, as advertised, feedback in response to how Brad M. feels we are in his words, “polarizing more towards a very specific political and philosophical stance.” We’ve decided to answer his concerns publicly.

First, reprinted with Brad M.’s permission, is his original email:

Hey guys, I’ve been a daily follower for over 3 years now and have loved reading vast quantities of awesome stuff on your site.  I just want to say thanks first of all for a job VERY well done for a VERY long time.  Geekosystem rocks my world.

Now, with that said: I notice lately that you’re polarizing more towards a very specific political and philosophical stance.  Not that this is necessarily a bad thing in itself, but when you start excluding and attacking anyone who happens to not fit your pre-cut stereotype… you also tend to alienate and generally piss off an ever-increasing portion of your reader base.

In terms of false dichotomies, do we geeks tend to be more democratic than republican?  Yeah, probably so.  Do we geeks tend to be more into science and empiricism than Hinduism / Christianity / Islam / other-world-religions?   Sure, at least in the US or NZ, we probably do.  But please take it from me as a life-long philosophy geek: no matter what we believe, there will always be somebody much smarter who disagrees with us.  (Full disclosure, I’m also one of those registered independents that your mother warned you about.)

So, my point: umm, enough with the hate, please?  There are many incredibly smart and well-meaning political scientists and economists of all sorts who will disagree with your take on politics / economics / etc.  There are even more incredibly smart and well-meaning intellectuals and scientists from every discipline who will disagree with your take on macroevolutionary theory / creationism / ID / etc.  Attacking them ad hominem is not a good look for an infotainment site, IMHO.

And besides, both of those debates in particular make about as much sense as a debate of KANTIAN EPISTEMOLOGY vs. METALLURGY.  Blindfolded.  In the dark.  In Old Entish.  (This is actually getting more WTF and yet more fun as I think about it.)  It’s a bit like Dan actually alluded to several days ago.  We’re talking about multiple very complex and very different subjects and systems converging somewhere on a distant plane that we can’t see.  My point is that there’s *absolutely no shortage* of grey area for this stuff.  Sociopolitical systems.  Cosmology.  Biogenesis and theoretical astrophysics.  Do you think, just maybe – and ESPECIALLY after being reminded of how small we all are by that big bang video from yesterday – that you could find a bit of room for humility somewhere in there?

Happy moving to all – and much love from New Zealand,

Brad isn’t the first to voice similar opinions to us, but because he did so in a thought-out, well-written, and polite email, I decided he deserves a response. Because I know he’s not alone in his opinions I thought I would do so publicly. Here is my response as Senior Editor of Geekosystem:

Although Geekosystem’s current team have what many consider fairly liberal social and political views, our editorial decisions aren’t driven by politics. They’re driven by science, because that’s important to us. Geekosystem covers a broad spectrum of topics, but what makes us unique is that we try to look at those topics with our own specific viewpoints. The risk we run is that not everyone will agree with us, but we’re comfortable enough in our beliefs to stand by them publicly, and to put our byline on everything we write.

We are not an objective news site. We are a curated blog run by people with thoughts and opinions about what’s interesting or important enough to spend our time writing. Not everyone will agree with what we write about or how we do so, but we have no interest in trying to be a site that appeals to everyone, because that’s an impossible and frankly boring goal.

At times we have been very outspoken on topics we feel strongly about. The goal in doing so isn’t to alienate anyone who disagrees with us, it’s because if we think something is interesting enough to write about we probably also have opinions about it. It would be disingenuous of us to hide those thoughts and feelings in a post about a controversial topic for the sake of trying to please the whole Internet.

Readers who disagree with our opinions on topics like Creationism, Evolution, or anything else are free do so, just as we are free to have and voice those opinions in the first place.