Double points to Nye for keeping a straight face the whole time. 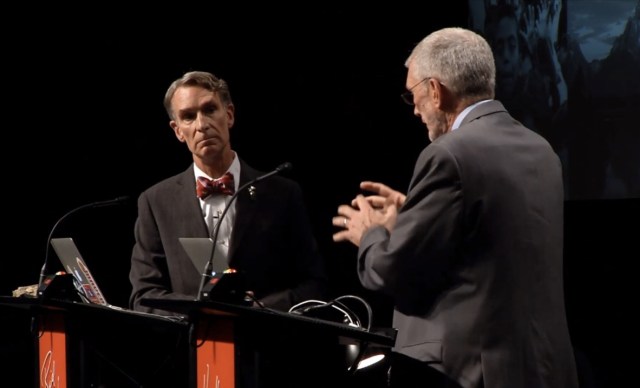 Last night, Our Friend Bill Nye debated the issue of whether Creationism is a viable model for teaching the origins of the Universe against creationist Ken Ham. (No. No it is not. Stop saying that it is, because it is not.) Obviously, Twitter had some thoughts on the debate. Here are some of our favorite comments.

As we mentioned in our post about the debate, it seemed like creationists saw everything Ham said as a reasonable, factual statement that really showed Bill Nye what for. Meanwhile, smart people were frustrated watching Nye’s evidence-backed arguments of science falling on willfully ignorant ears.

As it is wont to do, Twitter used to the opportunity to make jokes.

here’s a photo of Jesus holding a baby raptor so #creationdebate over pic.twitter.com/MSL8X2FZy1

There were actually quite a few pictures of Jesus and dinosaurs we found when searching the hashtag. Most were posted ironically; some we couldn’t tell.

Host of PBS Idea Channel, Mike Rugnetta, thought somebody was being left out of the discussion.

Excited to watch all of #CreationDebate later this week, though honestly disappointed the great Cthulu wasn’t also invited to make his case. — Mike Rugnetta (@mikerugnetta) February 5, 2014

As with Creationism itself, the only “evidence” Ham had to present was the bible. His claim that the bible is a book, at least, was accurate.

“The Bible is a real book.” — The only true thing #KenHam has said all night. He is right. It is an actual book. #creationdebate

Some people took Ham’s reliance on a book as evidence to make some other claims.

Yo guys! I found this book that proves that people can fly! #creationdebate pic.twitter.com/3DTEKzl6Zn

Yo guys I found this book that proves the existence of Spiderman #creationdebate pic.twitter.com/7Z0eWu11OI — Travis Ryan (@DrTarvis) February 5, 2014

I’d love to see Bill Nye’s notes after this. “what is this I don’t even” #creationdebate

I make no apologies for being 100% on the side of science and reason in this debate, but creationism had its supporters last night as well. Many of them tweeted with the hashtag #TeamHam, which confused some people.

I was disappointed to learn #TeamHam wasn’t about lunchmeat. #creationdebate

Not unlike their leader Ham, the creationism supporters turned to the bible for evidence.

“If you look to God for answers, He will reveal Himself to you.” #TeamHam

That’s still not an argument that holds any weight in science.

(Image via Answers in Genesis)