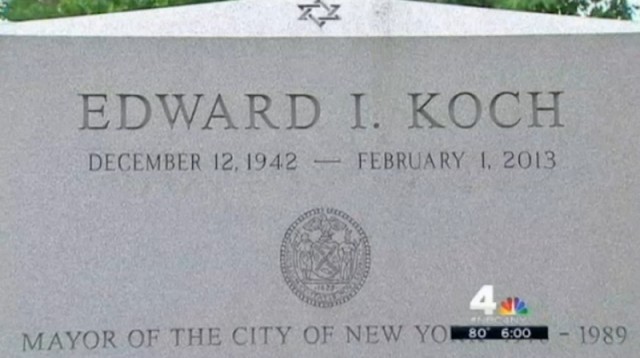 Storied New York mayor Ed Koch had his funeral planned down to the last detail when he passed away this February at the age of 88, even going so far as to visit his own grave site and pen his own epitaph. Unfortunately, it seems he didn’t leave anyone in charge of proofreading the final inscription on his tombstone. NBC New York reports that the tombstone marking the three-term mayor’s plot in Manhattan’s Trinity cemetery contains one minor error — it lists Koch’s date of birth as December 12, 1942, when Koch was actually born on December 12, 1924. So close…

God knows we’re not immune to the occasional typo, a fact many of our readers are ready — and right — to point out when they occur. We do luck out, though, that nothing we may misspell in the heat of a busy day is, well, set in stone, and then put on top of a grave to memorialize the dead. That would be a really embarrassing place to find a typo.

The man behind the typo, Tommy Flynn of Flynn Funeral and Cremation Memorial Services, is appropriately chagrined by the mistake, and has vowed to repair it immediately. In the meantime, the rest of us will take a moment to live in a lovely fantasy where a spry, 70-year-old Koch is still spreading the gospel of “How’m I doin’?” around this fair city.