Man Has QR Code Etched on His Mother's Grave 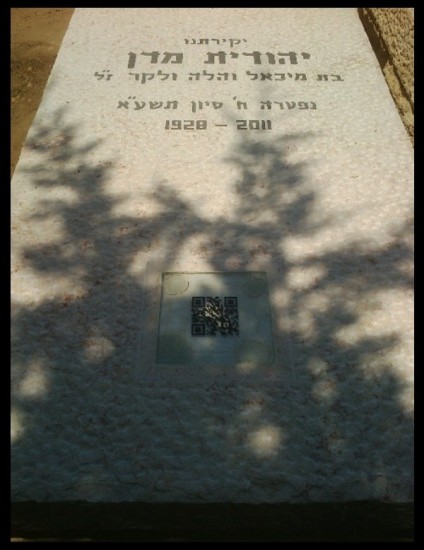 Regardless of how you feel about it, virtual immortality is totally a thing and now, thanks to Israeli Yoav Medan who had a QR code etched onto his mothers tombstone, it may become an increasingly mobile thing. The code itself isn’t a sticker or plaque or any kind of affixed image, but rather is laser etched into the stone of the tombstone, the white bits remaining raised, the black bits being etched in as indentations. Apply some thick, black paste and boom, you’ve got yourself a decidedly neolithic QR code that is erosion resistant. Bet you never expected to see that noun-adjective pair. The code directs users to a website Yoav has dedicated to his mother’s memory, a site which he plans to expand in the future.

The QR code carver is apparently chomping at the bit to turn this into a business, but is this something that would really catch on? It’s certainly a cool idea, but if you spend some time thinking about the practical application, it breaks down a little. Anyone who is coming to visit a grave probably had a relationship with that person, right? In that case, if there is a web memorial, this visitor is probably already aware, correct? QR codes generally serve to connect strangers and passers-by with media, and when you think about it that way, the guy who would benefit most from a tombstone QR code is a guy who doesn’t know the deceased and isn’t aware of their web memorial. If thats the case, do you really want them to be seeing it? After all, unless the deceased is a celebrity, it means Joe Shmoe is out prowling random gravestones. Still, the same logic applies to tombstone etched images, and those remain popular enough. So, where do we draw the line between memorial and postmortem stalking? Apparently not at QR codes.