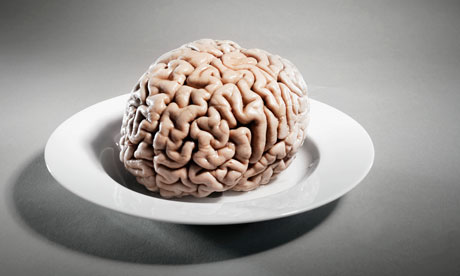 Everybody knows that diet and exercise is a great way to try to maintain the ever-more fragile facade of youth as you barrel towards a slow but inevitable decline, but did you know that diet can actually help keep your brain from aging? Neither did anyone else until researchers at the Catholic University of Sacred Heart in Rome found that the molecule CREB1, spurred into action by a strict diet, activates a whole bunch of genes that add to the longevity of that big ol’ hunk of meat.

Previous experimental tests have suggested that a reduced calorie diet in mice resulted in better brain health, but until now, there’s been no explanation of exactly what was going on. In the tests, mice had to stick to a calorie restrictive diet in which they consumed only 70% of their normal caloric intake. In these cases, mice would not become obese or get diabetes (duh) but they would also show greater cognitive ability, lower levels of aggression, better memory, and less chance of getting Alzheimer’s. In contrast, a calorie intensive diet lead to obesity, which not only doesn’t help but actually made things worse, decreasing all kinds of mental functions.

The discovery that CREB1 is the factor behind these changes is a big step in understanding the link between brain function, weight, and diet. The researchers not only found that CREB1 activity could be increased with a calorie restrictive diets but also that calorie restrictive diets are effectively useless if that CREB1 isn’t around. In fact, if you don’t have some CREB1, the researchers discovered, you might as well be fat, old, or fat and old as far as your brain is concerned.

Naturally the next step is to try and figure out what kind of power CREB1 has once it’s isolated from the calorie restrictive diet. “This discovery has important implications to develop future therapies to keep our brain young and prevent brain degeneration and the aging process. In addition, our study shed light on the correlation among metabolic diseases as diabetes and obesity and the decline in cognitive activities,” says Giovambattista Pani, the study’s lead researcher.

So, bottom line: It’s probably healthier to not be fat. Being fat makes bad things in your think-skull.