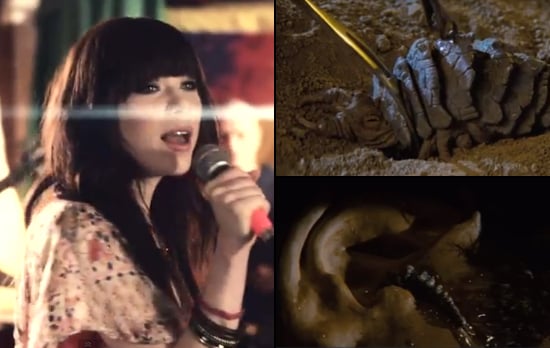 On your way to work, somewhere, somehow, you unfortunately catch a snippet of some catchy pop tune. Maybe you walked into a store playing it, or maybe some guy was whistling it on the train. Either way, it’s all over. You’ve got yourself an unwelcome intruder: The dreaded earworm, a song or melody you cannot get out of your head, that loops endlessly for minutes, hours, or days on end. Well, good news: Science may have a way to destroy those infernal worms, using mind-engaging activities like solving anagrams.

Also, yes, I absolutely do picture earworms to look like the Ceti eels in Star Trek II: The Wrath of Khan. Especially those originating from Carly Rae Jepsen. Some would even say Nickelback. Poor Nickelback. Poor people that get earworms of Nickelback songs.

Here’s how it works, according to findings published in Applied Cognitive Psychology: You need to occupy your working or short term memory — with anagrams, an engaging book, or some sort of puzzle. Something that challenges your mind but not overly so needs to take up that space.

Music psychologist Dr. Ira Hyman of Western Washington University is behind the research, and here’s what he told the Telegraph:

“The key is to find something that will give the right level of challenge. If you are cognitively engaged, it limits the ability of intrusive songs to enter your head. Something we can do automatically like driving or walking means you are not using all of your cognitive resource, so there is plenty of space left for that internal jukebox to start playing.

“Likewise, if you are trying something too hard, then your brain will not be engaged successfully, so that music can come back. You need to find that bit in the middle where there is not much space left in the brain. That will be different for each individual.

Dr. Hyman and his team actually subjected volunteers to Lady Gaga, Beyoncé, and the Beatles to make these conclusions, while he had them work through mazes on paper, solve anagrams, play Sudoku, or read books. Sudoku worked, when they weren’t too hard, but anagrams involving five letters proved the most effective.

Earworms are, of course, different for everyone, and sadly, they don’t have to be bad songs to stick in your head in an intrusive way — but it helps. They just need to be catchy. For every “You Belong With Me,” there’s a “Master of the House.” We all have our demons and our earworm-spawning angels.

Either way, break out those anagrams before it’s too late! Or find a good book to read, hurry! Not Goodnight Moon, though, and not The Fountainhead. You’ve got to find something in between.

While I’m willing to give this a solution a go, I personally think this it’s still just treating the symptom. Scientists need to go after the source of these vile earworms and stop them before they hatch.