This Guy Put an Ear in His Arm [Video] 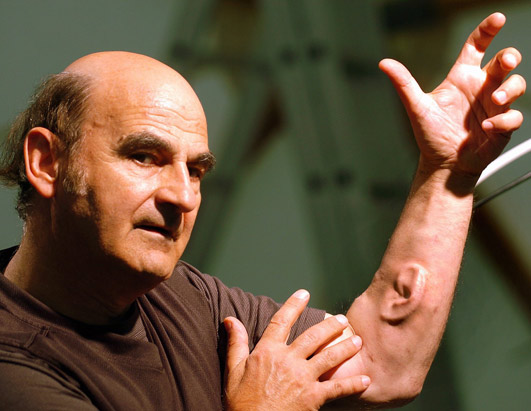 So, last week, I nearly gave myself a panic attack over getting a part of my ear pierced. Meanwhile, this guy put an ear in his arm. For art. Australian artist Stelarc had an idea to share what he heard on a daily basis with people around the world. So, as logic would lead him, he put an ear in his arm. Insert Van Gogh joke here. Video after the jump.

If you’re wondering if this is an actual human ear underneath the surface of Stelarc’s arm, I can assure you that it’s not. It’s a non-organic “biomaterial” structure shaped like an ear, but Stelarc’s own cells will form the ear around it. And no, that is not more normal than an actual human ear being shoved into a dude’s arm. After a year, he will have a microphone inserted inside the arm-ear, which will be hooked up to a transmitter that will make available everything “heard” by the arm-ear 24 hours a day. Great.

“It isn’t for my benefit”, he said at the launch of the Kinetica Art Fair in London. “I have two perfectly good ears, but to explore the idea of me becoming an acoustic device for other people.”

No, Stelarc. It’s not for your benefit. Especially since you nearly lost your arm to an infection. But mostly because everyone listening to what your arm-ear hears will hear not only everything you hear, but everything you do. I hope it has an off-button for, um, private moments.