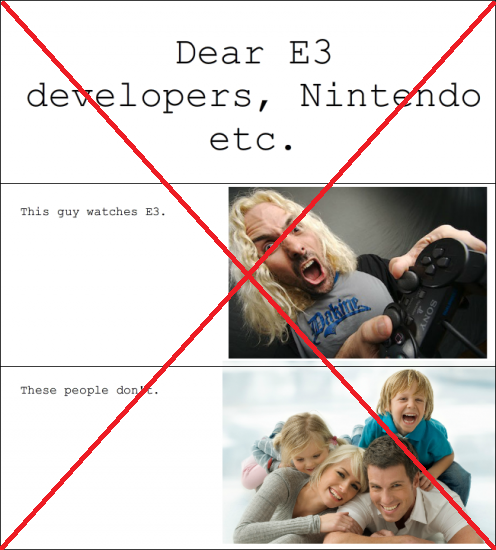 With E3 in full swing, gamers and journalists alike are all over the press conferences and announcements. This year in particular, things have been a little dull. Microsoft’s press conference was chiefly concerned with the Xbox as a “media console,” and Nintendo’s Wii U stuff sort of panders to the Wii Fit-using masses. Many of the hardcore gamers who watch increasingly accessible E3 footage are feeling a little miffed that their interests aren’t being catered to. After all, they’re the real fans, and E3 is about real gaming, damn it! Well, not really. E3 is a trade show; it’s not for gamers.

The image above (without the red X, of course) spent a good deal of time sitting atop the front page of Reddit with some 12,000 upvotes, and to a certain extent I can sympathize. E3 this year has been kind of boring. Believe me, I too am tired of hearing people talk about “entertainment experiences” or seeing EA parade nothing but mass market games at a press conference. At the same time, though, it’s very unfair to be offended. The reason that E3 can seem so hit or miss for gamers is because it provides a peek into a whole different world of the gaming industry. Sometimes it may be interesting for gamers, but if it is, that’s just a happy accident, not an overall goal.

The main purpose for E3 is to get games on shelves and to get money. It’s not just games press and developer superstars walking around the show floor and chilling out, it’s also bigshots from GameSpot, Target, and even Walmart who are trying to decide which games they should use to fill their limited, physical shelf space. It’s people with money trying to turn it into more money. These guys aren’t going to be nearly as interested in the niche-sweetheart, the Mirror’s Edge 2s, or games that are innovative and might push a genre forward. These guys want to get behind things that will move. That’s why accessibility and non-gaming capability are such a huge part of these press conferences. Those are the qualities that will make these suckers come off shelves in the hundreds of thousands and open up the market. Everything you think is wrong with gaming? Those are the selling points.

It’s something E3 has grappled with in the past, and probably will grapple with in the future. The spectacle of the conferences definitely suggests that this is supposed to be entertainment for someone. Just think of all that craziness that accompanied the Kinect announcement, or the fact that Usher performed this year to promote Dance Central 3. Likewise, the state of the Internet nowadays really allows E3 happenings to leak out to the general public in real time and in full. That being the case, it’s easy to lose sight of the fact that this is a trade show, about business. It’s cool business, but business nonetheless. There’s a reason the general public is not invited.

That said, if you thing games are interesting — or more importantly if you think the games industry is interesting —  lap it up; E3 means there’s plenty to see and read about, especially if you find the right outlets for insightful commentary. But if you don’t want to hear about new mass market peripherals and “compelling new media opportunities” in great detail, don’t watch industry press conferences in full and expect to be entertained.