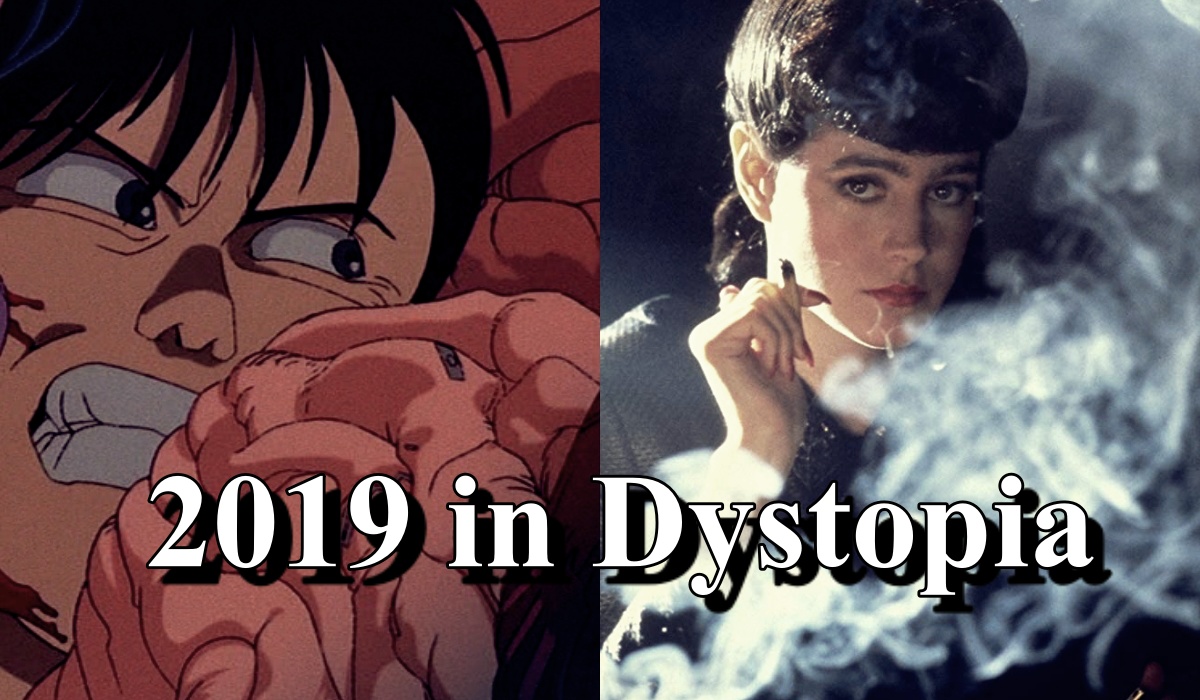 The year 2019 is over, which means we made it, kids! Woot! Let’s look at what 2019 was supposed to look like in the dystopian world of five films. Close?

After a mysterious explosion levels Tokyo and starts WWIII, upon the ashes of that world, Neo Tokyo has arisen. The 2019 we find ourselves in is unstable, filled with crime, corruption, and a bunch of hoodlums tearing up the streets. Among the young people raised in this society are our protagonists: bike gang leader and well-dressed Kaneda, and his childhood friend, a young, insecure sweet-baby-angel named Tetsuo.

During a street chase, Tetsuo ends up in contact with a powerful psychic force and begins developing abilities that make him powerful but highly unstable. As Tetsuo’s power begins his unraveling, the government has to come to terms with its human experimentation and the legacy of creating power they could not control.

Young people paying the consequences of adults and the failures of previous generations. Check. Also, the Olympics are happening in Tokyo in 2020 as it says in the movie, soooo …

In 2019, two attractive people (Ewan McGregor as Lincoln Six Echo and Scarlett Johansson as Jordan Two Delta), live on a tightly controlled facility for people who have survived a vague disaster that has made the outside world uninhabitable, except for “The Island” (dun dun dun), a paradise. Every once in a while, people are “rescued” from the compound and brought to the Island, while others “win the lottery” and get to go to the Island. Surprise, these attractive people are all clones that are grown as spare parts for super-wealthy people as part of a life insurance policy. There is no Island!

The super-rich taking advantage of science and human lives so that they can live forever? Sounds about right.

In 2019 Los Angeles, Rick Deckard—played by Harrison Ford at his most Harrison Fordest—is a “Blade Runner,” whose job it is to track down those known as replicants (bioengineered humanoids) and “retire” them, a.k.a. murder. This iconic piece of science fiction is all about the nature of humanity, and how does one really know the truth of one’s right to exist.

Ultrapowerful corporate overlords, police going around largely unchecked, and paranoia about knowing your truth as a person? That’s 2019.

So back in 2009, a plague turned most of humanity into immortal vampires—not the worst, as far as plagues go. Now, in 2019, after humanity has been harvested for its blood and hunted to almost extinction, Edward Dalton (Ethan Hawke), head hematologist for Bromley Pharmaceuticals, is working on developing a blood substitute. He’s a vampire who feels sorry for humans, so when he is brought in to figure out a cure for vampirism, he agrees, volunteering to be turned back into a human and start the human revolution.

We didn’t have a vampire plague, but humanity being run by a bunch of old white vampires is legit.

In 2017, there is a worldwide economic collapse, and the United States has become a totalitarian police state, censoring all cultural activity, but as a way of controlling the masses, they force convicted criminals to fight for their lives, Bread and circuses-style, with a show called The Running Man. Cut to 2019, police officer Ben Richards (Arnold Schwarzenegger) refuses to fire at innocent civilians, is arrested, and is sent to a labor camp. After escaping and being captured again, he’s put on the show.

A movie about human bloodlust and the dangers of reality television combined with a corrupt government … I have to laugh.

What other 2019 dystopias have we lived through?