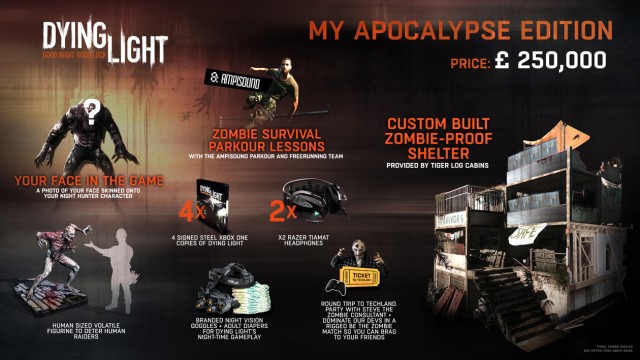 Usually video game special editions come with few deleted scenes, a poster, and maybe a statue. Well, how about a zombie-proof house?

Dying Light was released as a downloadable game in the UK last month, but the disc version is only coming out this week. In order to gather some attention, Techland, a Polish video game developing company, is making a My Apocalypse Edition with some unique goodies.

For only $400,000, you can get a custom built apocalypse-proof house equipped with live-in facilities, an upper deck with vantage points and an escape hatch, arsenal storage, and a living room with a TV, Xbox One, and sound system (you know, all the apocalypse essentials).

You also get a life-sized zombie statue (no doubt for deterring human raiders), your face skinned onto your character in the game (digitally, not literally), a trip to Poland to meet the game making team and Steve the Zombie Consultant, parkour lessons, night-vision goggles and adult diapers, two pairs of headphones, and four copies of the game itself. Why four? No idea.

This Apocalypse Edition of the game is only available to one person at GAME. It’ll cost you an arm and a leg but it’s totally worth it to keep your brain safe from zombies, right?

(via UPROXX and EuroGamer)