Rainn Wilson’s Dwight Is Getting An Office Spin-Off 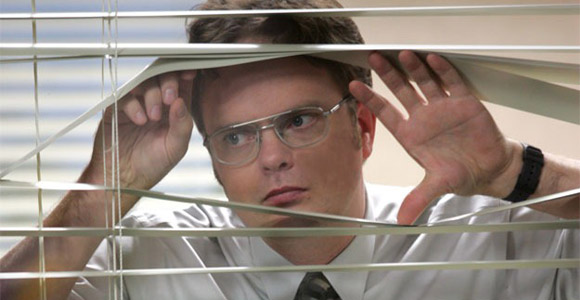 What is going on? What are you doing?! NBC is giving Dwight Schrute his own spin-off from The Office in 2013. Ok, no, we’re actually really excited about this, we just wanted to use those quotes. And this one. Bears, beets, and Battlestar Galactica.

Although no deals have been closed yet, Deadline is reporting that Dwight will get his own spinoff starring Rainn Wilson for a possible midseason 2013 launch. They describe the show as “a family comedy, which was the brainchild of Wilson and The Office executive producer/showrunner Paul Lieberstein. It will have Dwight (Wilson) living at the Schrute family beet farm and bed & breakfast, which have been featured on the show several times, including in an episode where Jim and Pam visited Dwight there.”

The spinoff is apparently set to be introduced in an upcoming Office episode that features the farm. “Paul and Rainn have been joking for years about Dwight’s life on the farm, his family and how ill-suited he is to run a B&B,” a source close to The Office told Deadline. “A while ago, it started to feel like a show to them. NBC agreed, it’s been further developed to include multiple generations, many cousins and neighbors. (It is unclear if that would include cousin Mose who has been featured on the show, played by Office alum and Parks & Recreation co-creator Mike Schur.) At its base it will be about a family farm struggling to survive and a family trying to stay together.”

You may also remember our report on Wilson’s co-star Mindy Kaling getting her own deal with NBC to write, executive produce, and star in an animated comedy about a girls high-school volleyball team. NBC had also considered an Office spinoff a few years back but that eventually became the Amy Poehler starring Parks & Recreation. But fans of the show shouldn’t worry, just because Dwight is getting his own show doesn’t mean he’ll be gone from The Office for good. Deadline writes, “If the veteran comedy is renewed for a ninth season as many expect, Wilson will return in the fall before segueing to the new series in mideason.” They also liken it to Kelsey Grammer’s change from Cheers to Fraiser, going from a workplace to family format.

What do you think? Would you watch a TV show about Dwight and his family?