We had a chance to chat with Nguyen at New York Comic Con. 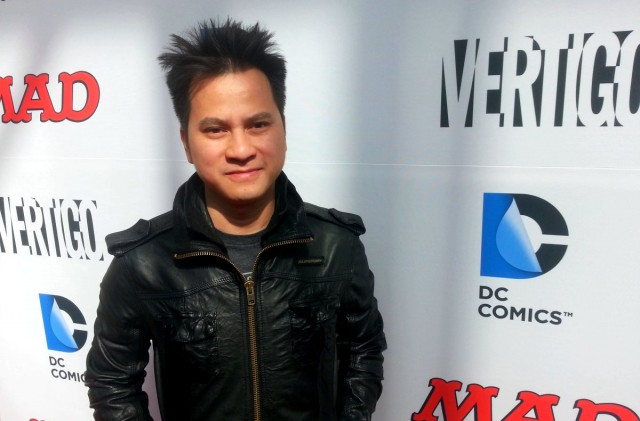 There aren’t many comic book titles currently on the shelves that a reader of any age could pick up and enjoy, but DC’s Li’l Gotham is exactly that — a truly all ages comic, and it’s great. We spoke to half of the book’s creative team, Dustin Nguyen, about comics for kids, making Batman adorable, and the future of the Li’l DC Universe.

Glen Tickle: Thanks for taking the time to talk to me.
Dustin Nguyen: It’s pretty cool. I’m a big fan of the site.

I’m a big fan of Li’l Gotham!
I was wondering who reads it.

Li’l Gotham is one of the few comics I’ve found that’s actually appropriate for really young kids.
Yeah. I have kids.

You can’t just go into a comic book store and grab anything off the shelf and give it to a little kid. Was that one of the things you were interested in about doing the book?
Yeah, definitely. When you work for DC usually they’ll send you comps, a box of everything we put out every month, and I have a ten-year-old son who can pull out Green Lantern and stuff, but my daughter she’s six. There’s never anything for her.

When Tiny Titans ended all we had left was Scooby Doo, which she reads on and off. There was really nothing else. For the last few years I’ve worked on really darker books. Nothing you can really share with kids. Then I got to an age where I was like you, just having a kid. Where you’re meeting parents and stuff, and they’re like “What do you do?” It’s so much nicer to be like, “Oh, I draw comics and here are some for your kids!”

Things you can actually show a child.
Ten years ago it would have been, “Check out this dark gritty stuff I draw.” Nowadays it’s a different demographic I deal with in real life.

Did you pitch the book, or was it something they were shopping around to get a team for?
We pitched the book. I pitched it like five or six years ago. We finally found a place for it in digital.

Do you have any plans for the book to bring in some past Batman storylines in a younger form?
Well everything we do stays in Li’l Gotham, but we do tap on stories once in a while. You’ll see [Batman] visiting Victorian England. That’s our little nod to Gotham by Gaslight. But yeah, we keep everything pretty much in our own little universe.

In the Halloween story you have a lot of the villains in there together. How did you decide which villains to include in a kid’s book?
With our Li’l Gotham I think one of the scariest characters that I’ve brought in was probably Two-Face. He’s not easy, translatable — I can make Joker funny. That’s his thing. Two-Face is a little scary so once in a while we use him, but we have to be careful not to freak kids out.

In the new Beware the Batman show they brought in Professor Pyg, which seems like a horrifying character to introduce to children.
I think it’s great.

I haven’t seen it yet or seen how they toned it down, but he’s kind of a nightmare to show to a little kid.
I dig that cartoon, [Beware the Batman] and I didn’t know I would. I’m kind of like a Batman snob, but when I saw that I was like, “Wow, this is like the Batman animated Year One.”

You mentioned Tiny Titans before, which I also miss, but that was very much aimed down at young kids. Was it a conscious choice to try to make Li’l Gotham accessible to kids, but also appealing to everybody?
The appeal we have with Li’l Gotham is I want it to be truly all-ages, where it’s not just for, say, five-year-olds. It could be for 30-year-olds. The idea we have when I draw it, and when Derek and I we plan it out, we want it to kind of be more like an interaction kind of book. You’ll read to the kid, and they’ll say, “Oh, Mr. Freeze is cute, but he’s sad. Why’s he sad?”

Then you can have the parent explain, “Oh, he’s sad because…”

You know, it reads fast. Ten pages goes like nothing, but what we want is when you’re done there’ll be a conversation between the parent and the kids where they can just explain to them, you know? And a knowing parent can tell the kid, “You know, Mr. Freeze is like this in his other life, and when you’re old enough you’ll understand.”

It’s meant to be a way for you to interact with the kid before and after you read. Not just read it, be done, and throw it away, because nowadays it’s, “Oh here’s a book, here’s a game to play on your own.” It’s easier, but it’s more fun to interact with your kids while you’re reading it.

The design of the whole thing is good to make it accessible to all ages, because Batman is a scary looking character. That’s kind of his thing. How did you approach the design of it?
The style of the drawing was just — there was a period where I was doing a lot of dark Batman books, and it was just an easy way to relax after a day of seriousness. That’s how sad it is. I would take a break from drawing Batman to draw more Batman.

But like, a cuter Batman.
Yeah. That style kind of came from when I was growing up I played a lot of Street Fighter, and they had this thing called Puzzle Fighter which is just tiny version of Street Fighter. That’s kind of how I learned to draw in that style, and also the way they watercolor all their art. Before going into the video game all the concepts were done in watercolor.

It was a lot of fun, and that influence was pretty much what I grew up on.

Are there plans to branch Li’l Gotham out at all? Maybe Li’l Metropolis, Li’l Star City?
We talked about it. Minitropolis and Smallerville and stuff, but we’ll see.

Those are adorable names!
They’re good names. You can just move from that name.

Yeah, that’s the whole pitch — “Let’s make a comic called Smallerville.”
Yes, Smallerville. It’d be great because we can have little corn, little farm houses. I would love to do that.

We’d like to thank Dustin Nguyen for taking the time out of his busy New York Comic Con schedule to talk to us, and we highly recommend Li’l Gotham to anyone, but especially anyone with kids. Though we can say with some authority than comic books don’t last long in the hands of eight-month-old babies.