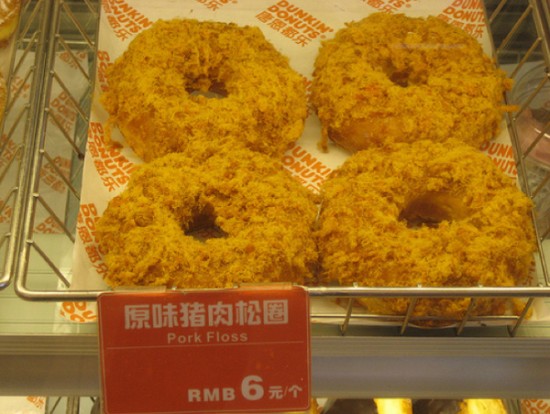 Just as Dunkin’ Donuts announced it has signed a deal with NBA megastar LeBron James to help promote the doughy brand in Asia, they also announced that they’ll be introduced pork donuts over in China in an attempt to satiate local tastes. Unfortunately, these “savory donuts” aren’t the only ones Dunkin’ Donuts are working on, as CEO Nigel Travis puts it, they have “a range of other savory products that [they] have been testing and introducing country by country.” This reminds us of those Meat Munchkins.

On top of the pork donuts, Dunkin’ Donuts said they are working on milk and tea bagels with a pork floss topping for release in China as well.

It hasn’t been announced as to whether or not LeBron James will be directly promoting pork donuts, but if you happen to be in China and see LeBron taking a big bite out of some donuts with shredded pork on top, it wouldn’t be a surprise considering he’s now the Asia brand liaison, and China is a pretty large part of Asia. If you’re wondering exactly why a basketball star is the brand liaison for a donut chain, aside from his huge fanbase in China, the chain is called Dunkin’ donuts, after all.