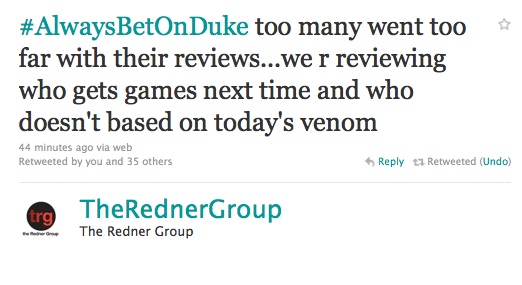 After around fourteen years or so, Duke Nukem Forever — the gaming industry’s biggest joke for that entire length of time — finally released, and guess what? It isn’t being very well-received. Some may find it offensive, some may find it satirical, but mostly, the negative reviews are because, come on, the game has been in development for over fourteen years, having been scrapped and rebuilt and changing development teams numerous times. Chances are it wasn’t going to be very good.

The above tweet appeared on The Redner Group’s official Twitter feed and various people managed to get a capture before it was removed. There isn’t much room to interpret the message in a way that is different from what it immediately seems like it is saying: Outlets that gave the new Duke a review that was deemed too harsh by The Redner Group would not receive a free review copy of future titles.

It is no secret that there are blacklists of outlets that do not get review copies of certain games, but generally, no one actually comes right out and says it, much less threatens outlets with cutting off the flow of review copies. Ars Technica contacted Jim Redner, the person who made the comments, and received the following response:

I believe reviews are completely subjective. Everyone is welcome to their own opinion and opinions are never wrong.

It is not my intention to bully anyone. I over reacted. I just voiced an opinion. I have poured my heart into this project and I just want it to succeed.

It is my hope that you understand.

Whether or not he overreacted, people probably won’t forget that he threatened to cut off the flow of review copies simply due poor reviews. I’m sure there are reviews that were exceedingly harsh and broke out of the bounds of an actual review, but still, if that were the case, he probably should’ve clarified as such.

2K Games, Duke Nukem Forever’s publisher, weighed in on the matter, and seems to have cut ties with The Redner Group:

“2K Games does not endorse the comments made by Jim Redner and we can confirm that The Redner Group no longer represents our products. We have always maintained a mutually-respectful working relationship with the press and do not condone his actions in any way.”