Dubbler App Wants to Be Audio Equivalent of Vine

If you've ever wanted to send a short voice message out to the Internet then Dubbler is probably right up your alley. 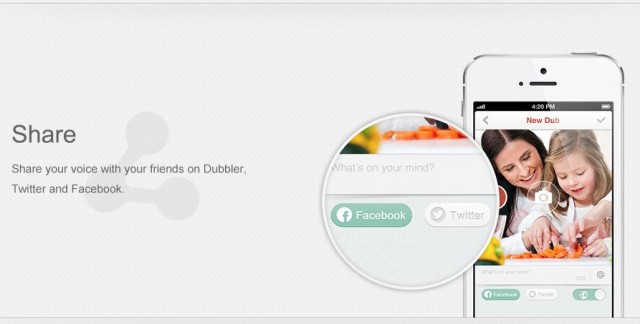 There’s no shortage of apps that let you easily share pictures, and apps like Vine make sharing short video clips just as easy. What about voice? That’s where Matthew Murphy and his company Appsurdity saw a hole in the market. He created Dubbler, an app that lets you share short audio clips through social media. I wasn’t sure who would want to do that, so I asked him during a brief phone interview.

After Appsurdity reached out to me about Dubbler, I installed it on my phone. The basic pitch for the app is “You don’t text your personality. You voice it.” It’s supposed to let you easily share your voice with the Internet, and it does. I just wasn’t sure what to do with it. So I recorded myself telling a joke.

A “Dub,” as they’re called, can be up to 60 seconds. Some suggestions I got from Murphy are to use it to tell a joke, sing a song, or ask a question. I suggested it might be a good way for we at Geekosystem to quickly explain a posted photograph, and when Dubbler updates with an easy way to embed a dub through HTML we might start doing that. He told me there are people doing movie reviews and crowdsourcing information. Rappers and musicians are on board including Common. RuPaul has even used it.

There are different filters you can apply to your dubs. Murphy compared it to Instagram, but for your voice. The filter I used was called “Techtronic” and it just drops some light techno music in the background. The “Romance” does the same thing with soft piano music. The rest of the filters manipulate your voice itself.

There are more filters coming, including one that will be the result of a contest. Murphy told me that he couldn’t tell me one of the filters, but that I’d probably like it based on what I write about here at Geekosystem.

He replied, “You’re good. I can’t confirm or deny, but there are some fun filters coming out.”

Dubbler is being touted as a social app, but ten percent of the dubs are marked as private. They’re used to have private conversations with small groups like Dubbler’s own team. They use it as an alternative to text messaging. One thing I didn’t like about the app was that between the link, and an automatic “Listen here and #DubUp” tag at the end of my tweet, I was only left with 70 characters to describe my dubs.

The app works, and it works well. I think the challenge is to get people to associate Dubbler with a specific type of content. When someone thinks about Instagram they likely think of selfies, pet photos, and food pics. SnapChat pretty much has the dick pic market cornered. I think once Dubbler finds its niche it could really take off, and personally I think if comedians started using it to send out jokes it could draw a decent following.

Especially if they send those jokes out in a Paul Lynde voice.

You can grab Dubbler for iOS or Android from their site, or in your respective app stores.