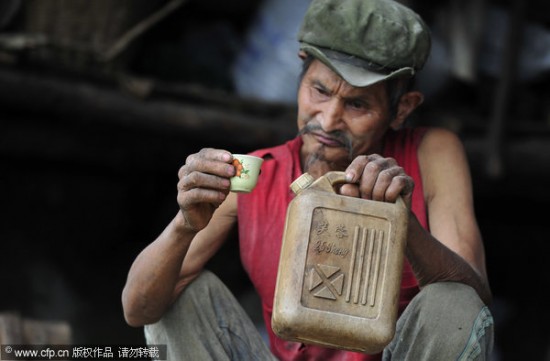 Gasoline is a hot commodity, with demand for the substance that powers cars and other machines growing by the second. But how much gasoline goes toward unconventional purposes? Well, in the case of 71-year-old Chen Dejun about 1.5 tons of the fuel makes for a pretty effective pain reliever. Dejun has been drinking gasoline to quell chest pain for the last 42 years, with no detrimental health effects.

Dejun, who lives in China’s Shuijiang municipality, is a stone cutter and master bamboo weaver who consumes about 3-3.5 liters of gasoline every month. The man gets his gasoline from a station at the bottom of the hill on which he lives. His daily habit of consuming gasoline started back in 1969 in response to coughing and sharp pain in his chest that didn’t go away with more traditional medication.

Elders in Dejun’s village suggested to him that perhaps he had tuberculosis and should try drinking kerosene. The suggestion made perfect sense to Dejun, who began drinking the liquid as a pain reliever. Dejun switched from kerosene to gasoline around 10 years ago after his village started using electric lights and kerosene become harder to find.

According to doctors at Second Hospital at Chongqing University, Dejun must have developed some sort of immunity to gasoline because drinking it should have killed him long ago. Despite emphysema, Dejun appears to be in good health. Although doctors are quick to point out that while the gasoline might be acting as some sort of anesthetic, it wouldn’t cure the underlying cause of any pain.