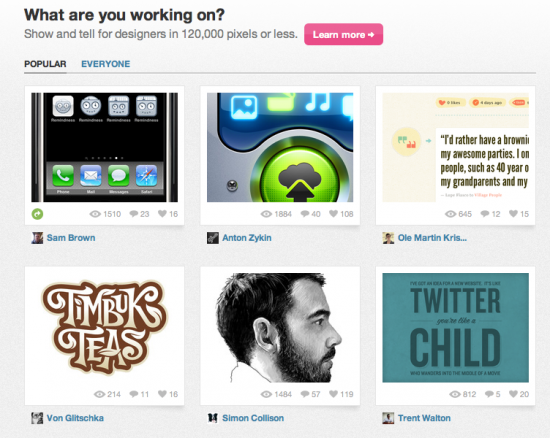 It seems someone has taken the Twitter mold and made something useful with it (or, at least, more useful). A new site called Dribbble is soon to open up to the public and allow developers to showcase the projects they’re working on.

“Dribbble is show and tell for designers, developers and other creatives. Members share sneak peeks of their work as “shots” — small screenshots of the designs and applications they are working on. It’s also a place to talk design, give and receive feedback and iterate toward better work.”

The way the site works is, like Twitter, by limiting what users can share. Here, instead of a character limit, designers get a 120,000 pixel limit with which to showcase their work in a screen shot. This leads to intriguing teases of upcoming software, applications, and art.

The site is currently in a private invitation-only mode, but will soon be open to the public. While it’s certainly a niche idea, it seems like the kind of site that will develop a very devoted (although relatively small) community of fans.