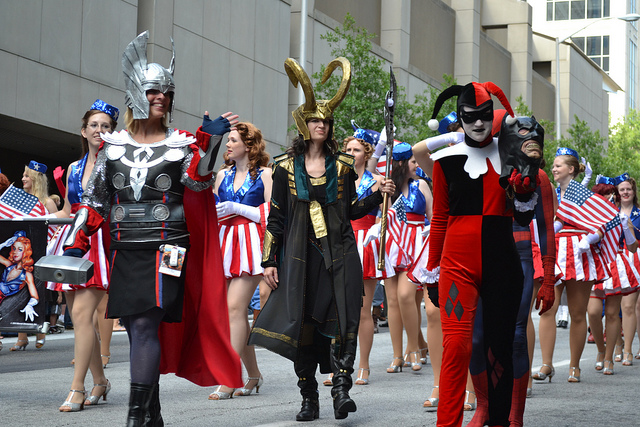 For a person who may take issue with large crowds and unfamiliar spaces, attending a fan convention can be a rather ambitious endeavor. I’ve avoided the notion for years, relegating my expression of fandom to tweeting, podcasting, and envious leering at friend’s photos from San Diego Comic Con, New York Comic Con and others. Occasionally curious, I’d check out the guest rosters for some of my local conventions. From the celebrities to the cosplayers, they’d largely reflect an antiquated generalization of the nerd identity: white, straight, and male. So aside from my own social anxieties, I didn’t get the impression that I, a Black woman, would be welcomed wholly in such a space.

Still, I felt that I was long overdue for a (potentially singular) fan convention experience. My friends would tell stories of fellowship within long panel lines, being in close proximity with some of their favorite nerd culture figures, spectacular costumes, and engaging in this environment that was specifically tailored to their very intense interests. I could make the attempt to navigate an event if I felt it was worthy enough.

At the behest of some of my friends, I decided to try my hand at Dragon Con, and I’m so pleased that I took the plunge.

For thirty years, the Atlanta-based con has cultivated a reputation of prioritizing the fan experience in a way that larger cons have not in recent years. To add, it’s the home of some of the most competitively creative cosplay on the scene. And yet, that point isn’t used to discourage marginalized fans from trying their hand at the art form. In fact, the feeling is quite the opposite.

“As a [woman of color], my first time in cosplay was at Dragon Con, and I only felt comfortable because everyone was so warm and encouraging,” say Dragon Con volunteer and cosplayer Kayla Sutton. “As a fan run convention, we are all there for our favorite fandoms and have no room to judge anyone.”

That very sentiment is evident throughout the four-day event. With an astronomical 82,000 attendees, all body types, ages, ethnicities, and ranges of cosplaying expertise are granted the space to participate at their level of comfort while being actively supported by the other con-goers. It’s that support that creates such a blanketing, overwhelming sense of community among the guests. Comic book creator Kelly Sue DeConnick spoke to The Mary Sue about the distinct, almost familial Dragon Con vibe.

“The whole experience of this show feels like a mosh pit,” DeConnick explains. “It’s this crazy space where everyone is like ‘AAAAH!’ But if anybody falls down, everyone picks them back up. That’s how I feel about this, that there is this care here. I do feel as though I feel safe. I feel like I am being looked out for.”

Writer, cosplayer, and avid Doctor Who enthusiast Tai Gooden echoes her outlook. “Dragon Con is a con filled with great people who are all about love and self acceptance. As a nerd, I always feel like I’ve come to a giant family reunion.”

Honestly, I’m not sure I would have believed that if I hadn’t experienced it myself. However, the few days I spent in this hyperactive hub were occupied with strangers all too ready to help me when I needed direction, eager to geek out with me, and genuinely cared whether or not I was having a good time. I witnessed fans who had never met prior to the event advocate for each other when line etiquette got a little out of hand at a popular Doctor Who panel. I listened to a harrowing recount of a con guest getting seriously injured while others jumped in not only to seek updates on her well-being, but ways to donate to her medical expenses. I watched many instances of people backing, encouraging, and uplifting each other. In turn, I readily let go of the concerns I harbored initially.

I want to encourage others like myself–those who felt somewhat overwhelmed or excluded by fan conventions–to look to Dragon Con, if it’s within your realm of possibilities. Give the cosplay that you thought wasn’t good enough a try; by the way, it is good enough. It totally is. Take part in a community that not only welcomes your dollars, but you–your whole self–with open arms. As a woman dressed as Deadpool said on my last night there: “Hey, everyone’s friends at Dragon Con.”