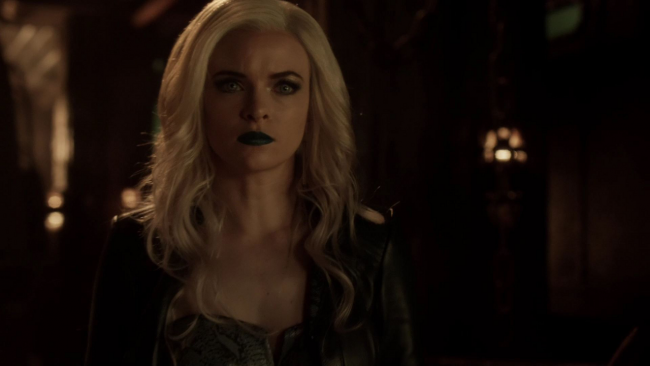 The third season of The Flash brought on significant changes for most of our beloved team. However, nobody experienced a greater evolution last year than Caitlin Snow. For the span of 23 episodes, fans watched the sharp-witted bio-engineer internally contend with her ice queen alter ego, Killer Frost. During a press conference at Dragon Con this past weekend, Danielle Panabaker spoke a little bit about the fun that comes with splitting her screen time between the two drastically different personalities.

“Honestly, I love that I get to play both,” Panabaker says. “I love Caitlin. I love that she’s such an intelligent woman and that her intelligence is celebrated and encouraged. And then to have the opportunity to be on a superhero show and to play a villain and to get to really take it very far … I always say that that’s the fun of being a villain on our show, too, is you really get to push it. You’re not limited to ‘trying to keep it real,’ so you get to have a lot of fun with it. ”

When asked what she was most excited to film during season three, Panabaker tells The Mary Sue, “I was really excited for episode seven of last year. I struggled a little bit because … we started to go down this road of dealing with Killer Frost stuff and then they kind of forgot about it for a while. So I was anxious to get back to it and that took a bit of time.”

As we continue to look back on the most recent season, the topic of crossovers arises. Since the show’s inception, one of the few constants the audience can look towards are the moments when Team Flash merges with Team Arrow, Supergirl, or the Legends of Tomorrow to save the planet. When asked who she’d like to share screen time with, Panabaker was quick to name the powerful Kryptonian herself.

Danielle raises an excellent point about The Flash, a criticism that much of their female audience has been vocal about for years. The most recent season especially drew attention to the show’s treatment of both Caitlin the Metahuman (seriously, must her powers be such a negative development???) and Iris West, who rarely had more to do than comfort Barry, even with the threat of inevitable death. Can fans of the women of Team Flash expect something different for the new season, especially after Barry’s descent into the Speed Force?

“Iris has certainly stepped up and taken more of a leadership role,” Panabaker assures us. “Team Flash is certainly trying to function even without Barry … Kid Flash is obviously out there trying to fill the Flash’s shoes. And you’ve got Cisco and Vibe, [who] are trying to help out, as well.”

As for Caitlin? Well, the season four trailer that was released at San Diego Comic Con certainly gave a strong impression that Caitlin was back in STAR Labs and ready to fight the good fight. That, however, may have been a bit of a misdirection, in terms of the beginning of the season: when the show returns in October, Dr. Snow is not a part of Team Flash.

Panabaker explains, “At the top of the season, Caitlin is still trying to handle things on her own.”

Though she couldn’t reveal much else about season four, Danielle Panabaker is certain that fans of both the doctor and her icy alter ego will be pleased with what’s to come.