Meet Downworthy, the Chrome App That Fixes Clickbaity Headlines For The Better

We would say, "it's the best thing ever!" but we're afraid of what it would replace that with. 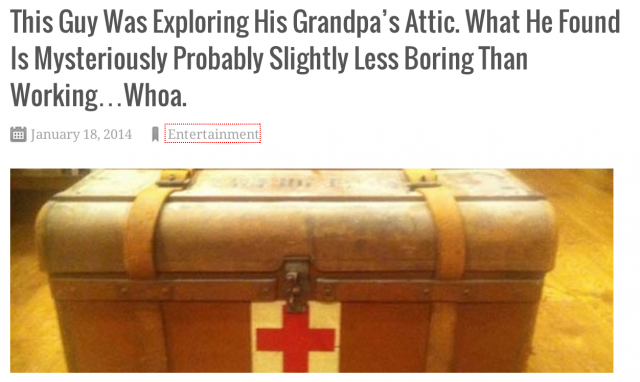 We might as well just come to terms with the fact that Upworthy-style “You won’t believe what happens next!!!” kind of headlines are the wave of the future. I mean, even CNN’s doing it now. Best just accept it and move on, right? Or we could filter them out with honest headlines, of course.  That’s where the new Downworthy app comes in.

The creator of the app, Snipe, describes her particular aversion to these sites of headlines thusly:

[The] articles are, in general, not nearly as bad as their titles – but the titles have become SO overblown, they’re meaningless and annoying. But people still click, so the trend continues. Consider this me doing my part to stop the insanity.

In order to combat the endless stream of clickbait, Downworthy takes commonly used phrases and replaces them with much more realistic and honest versions. “Literally,” for example, becomes “Figuratively”; “Epic” becomes “Mundane”; “Will Change Your Life Forever” becomes “Will Not Change Your Life in ANY Meaningful or Lasting Way.” It might not be the most pretty commonplace thing to exist on the face of the Earth, but it’s pretty great nonetheless.

There are screen caps of Snipe’s test headlines on her site for you to check out, but we wanted to try it out for ourselves, so we downloaded the app too and had some fun with it.

Unfortunately it doesn’t seem to work with Buzzfeed’s layout. We know. We tried. But otherwise, it pretty seamlessly integrates itself into most websites, even Google web searches.

In fact, it works on Geekosystem, too:

Snipe’s been constantly adding new phrases and words into the database, too, and the code is open source if you would like to help out. So get to it, nerds! Maybe you’ll find that one piece of nonsensical folklore bullshit that will blow everyone’s mind.