And Now, Some Wise Words From the Guy Who Told Us “Don’t Panic” 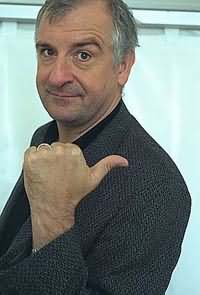 ‘Interactivity’ is one of those neologisms that Mr. Humphrys likes to dangle between a pair of verbal tweezers, but the reason we suddenly need such a word is that during this century we have for the first time been dominated by non-interactive forms of entertainment: cinema, radio, recorded music and television. Before they came along all entertainment was interactive: theatre, music, sport – the performers and audience were there together, and even a respectfully silent audience exerted a powerful shaping presence on the unfolding of whatever drama they were there for. We didn’t need a special word for interactivity in the same way that we don’t (yet) need a special word for people with only one head.

— Douglas Adams, from an essay written in 1999 so full of incredibly prescient and evocative quotes about the nature of the internet and technology that we could barely pick one to highlight here. Adams died ten years ago today of an unexpected heart attack.