The Doubleclicks Discuss Their New Album | The Mary Sue

The Doubleclicks Talked to Us About Their New Album, Gender Identity, and the Awesomeness of Cats 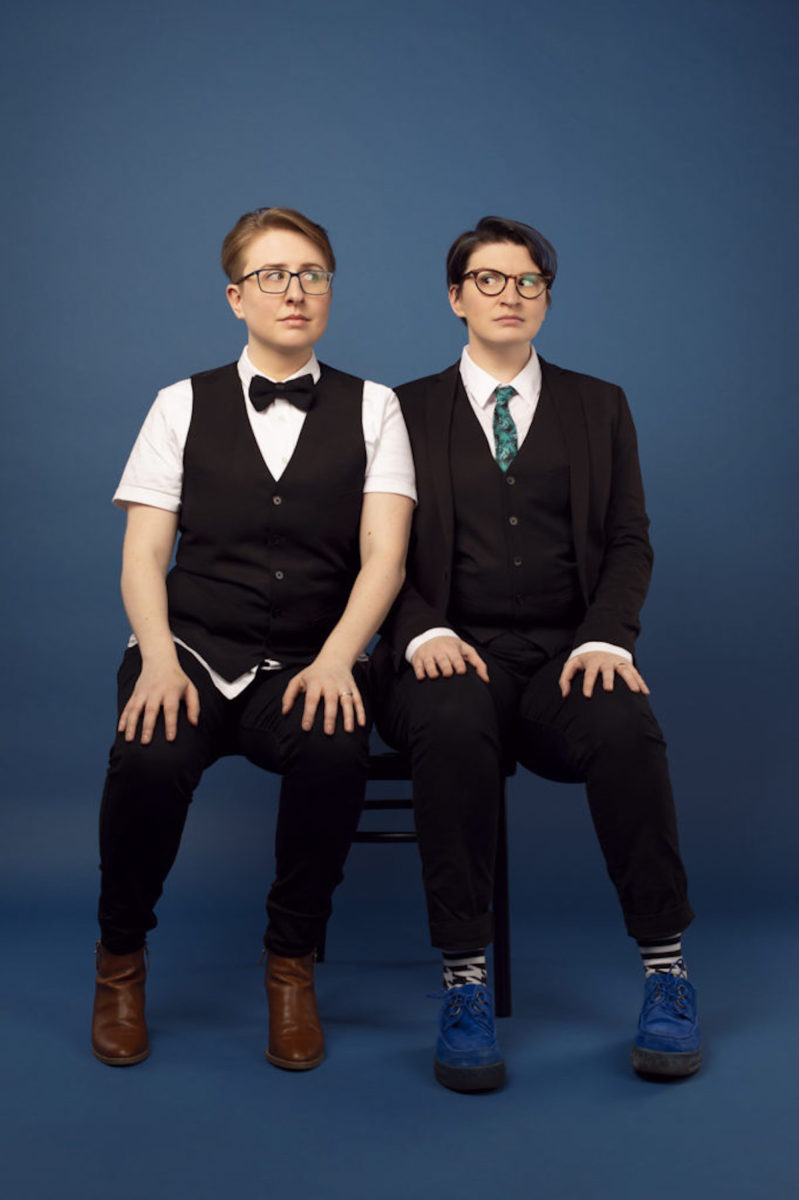 The beloved band The Doubleclicks are back with a new album that’s already topping Billboard charts. The geeky, insightful, empowering sibling duo of Laser Malena-Webber and Aubrey Turner have described this new album, titled The Book Was Better, as “a comedy album,” which might seem like an obvious statement if you’re familiar with their work.

But their last album, Love Problems, was a bit sadder—or perhaps more serious. In a way, The Book Was Better is a return to form, leaning back into those comedy roots. In true Doubleclicks fashion, though, those “lighter” songs still manage to tackle incredibly personal issues from boundaries and consent to gender identity.

I was lucky enough to speak with Laser and Aubrey about their new album, which is available now.

The Mary Sue: I’d love to talk about your use of metaphors throughout your work. You seem to use these big metaphors to describe more personal things–like superpowers for self-care and empathy, but then you also use these smaller images as a way to access bigger ideas, like gaming as a metaphor for gender identity. On top of that, on every album, you tend to have at least one song that is just a total emotion gut-punch. I’m wondering how you come up with your metaphors and if you’re aware going in of which ones are going to resonate especially hard with listeners?

Laser: Well the metaphors come from the stuff we’re interested in. We’ve spent a lot of time being classified as a nerd band–which we have no problem with–but we don’t really write a song about video games or dinosaurs so much as we write a song about growing up or gender or whatever. And then we include the imagery that we like and that we know that our audience and our friends are into. But really it’s stuff that occurs to us—like for example, “I’m Winning,” I think a lot about, about games and about victory conditions, because I love games and I love finding various different ways to win. And so when that kind of came to me, I was very excited about sharing that one.

I think that just like with any nerd, that we related everything to pop culture or the stuff we like or to the kind of media we’re consuming. But you never really know how a song is going to be received until you release it. Fortunately, we kind of constantly really stuff. So a lot of the songs on this album, for example, were released via a podcast called You Should Write a Song About That. And it has a very small audience but those people really gave us a good impression of what people were going to like and what people were gonna react to. Basically immediately after we wrote the song, we got feedback. We’re that band that always just puts things right out on the Internet. 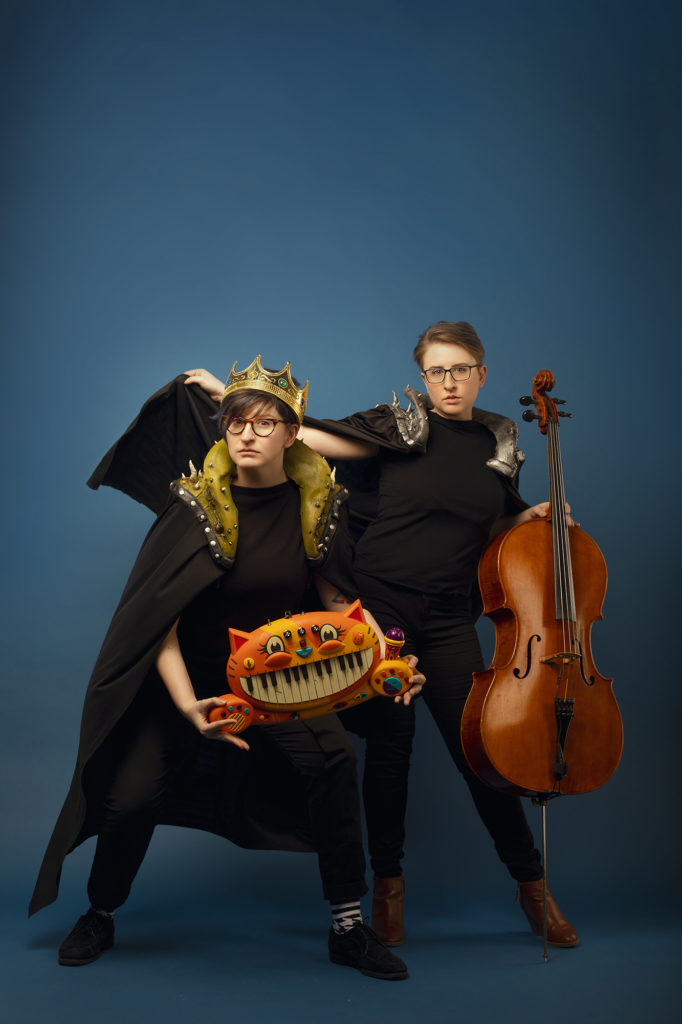 TMS: I have to say that I really love the idea of using cats as an inroad to talk about boundaries and consent. When I fell in love with your work, I had zero cats and now I have three cats and I thought I understood your songs about cats before, but now I really see the truth of them.

Laser: Yeah, cats are the best. I mean, when we started the band, I didn’t personally have a cat. We had cats in our world and in our neighborhood who would wander into our house. But yeah, cats are great. And the song “Boundaries” is really just so true about my beautiful cat Marzipan. It’s one of the things I love about cats, is they’ll tell you what they want and how to make them happy. And that’s all I want, is to know how to help people in a way that makes them comfortable. It’s so good in a relationship, to know what’s going to help and hurt somebody and it’s good with a cat as well.

TMS: Laser, you’ve talked about how your last album, Love Problems, and also how your last interview with the Mary Sue both played a role in you coming out as non-binary. How did that happen?

Laser: Yeah, we had a song on the last album called “Women Know Math,” which is a great song and I stand by it, it’s really nice. But in talking about that song, specifically with The Mary Sue in an interview which was really, really fun, the question was something like, “gender is a love problem, but could it also be a solution?” And immediately I was like, “No! What are you talking about?! Gender is bad! It’s so bad!” And I, like, fell into a depression about it. And it took a while for me to sort of process those feelings. Like, why does just thinking about gender and my gender specifically make me so uncomfortable and angry?

And that’s when I sort of came to this conclusion about something that had been in the back of my mind for basically my whole life, which is that I wasn’t doing gender right. (Laughs.) I wasn’t presenting the way that I really wished I could. Basically immediately after that, Aubrey and I had a good conversation and I was able to sort of figure out my stuff and do a lot more research into non-binary gender identities and kind of test the waters of that being part of my existence, which is something I recommend for people who are also questioning. It was recommended to me that I just try with a trusted friend and see if them using different pronouns for you or a different names feels right. And so that’s how I started. And it has changed my life. It has made me so much happier as you can tell in the song “I’m Winning.” It just has transformed me from a person who feels like I am trying to fit into a role that will never fit me into somebody who feels like I am doing exactly what I should do (at least in terms of gender). And that has really, really, really made me happy.

TMS: Is there a through-line for this album or any of your albums or is it just a collection of things that are important to you at that moment in time?

Aubrey: So, the Doubleclicks took a break after the last album; we had a lot to process and so we went into “reality” and had a lot of experiences that we hadn’t been doing as a band together. So we kind of had some time away from the band and got some day jobs and did a lot of therapy and thinking and concentrated on other things.

And then when we came back and started saying, “Hey, what if we wrote some new songs again?”, they all seem to have that throughline of talking about what it’s like to be away from the Internet, and what we had learned. So this collection of songs all came out around the same time. Like Laser said, we were doing the podcast You Should Write a Song About That, where we were having conversations and then writing a song every week. And so a lot of those songs made it onto the album and were just about real life experiences. We’ve written on previous album lots of songs about the Internet and this one not as much.

Laser: I don’t know that we set out to write to a theme, but once we’ve figured out the theme, it becomes pretty clear.

TMS: How is it different writing songs now that you live in different cities?

Laser: It is a little different, but not much different. We’ve always kind of powwowed on the concept and then I go off and write the words. And then Aubrey works up the production of the song and all the music and what it’s gonna sound like. And now we do that, ironically enough, over the Internet. But honestly, it hasn’t really changed that much about us and we talk on the phone every day for like an hour. So we’re really still spending a ton of time together, we’re just doing it in different weather.

TMS: I write a lot about the overlap between the personal and the political and how very personal things are incredibly political and vice versa, and I’ve always felt that idea is at the forefront of your work. I’m wondering if, one, if you agree with that and also if that’s different in a time when these things like empathy and self-care have become such distinctly political issues?

Laser: I think it is. I think it’s so hard to ignore the fact that basic humanity is being challenged for a lot of folks. And to us, it’s really important to demonstrate that we believe in the value of everybody. And I think we want to make sure that that’s clear. With this album specifically, we wanted to make something that was a bit of an escape–something that was very positive and inclusive and empowering, but also something that you could go to, to recharge in the midst of the battles that we’re all fighting right now, instead of something that would maybe bring you down a little bit. But definitely, we think about the impact that the work is going to have on people, probably more than when Obama was president.