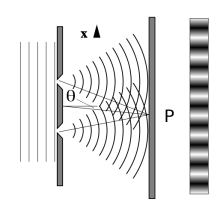 The famous double-slit experiment tends to be a go-to experiment for science, as hilariously shown by it being performed in Minecraft with chickens. The point of the experiment is to show that matter and energy can be displayed as both waves and particles. In the experiment, light is shot at a surface that contains two parallel slits, and due to the wave nature of light, the light passing through the slits is split into a light and dark beam, which is observed on a surface behind the one with the slits. This isn’t something light would do if it only consisted of particles, but when the light hits the surface behind the one with the slits, it is absorbed as if it were made of particles. A team at the University of Vienna in Austria, however, announced they completed the experiment using very large molecules instead of photons.

The research team used heavy molecules made up of 56 atoms and 114 atoms, which is noteworthy because not only did complex molecules behave like a wave, but because the complex molecules change their shape when passing through the slit. Co-leader of the project Markus Arndt humorously (probably unintentionally) explained the way the community views the results of their molecule experiment:

Quantum physics, the answer to all things that don’t have an apparent answer.

English scientists Thomas Young first performed the experiment back in the 1800s, and disproved the popular-at-the-time theory that light was made out of tiny particles. However, in 1905, Einstein found that light also acts like particles in addition to behaving like a wave. Then, in 1961, German physicist Claus Jönsson found that when electrons passed through the two slits, they produced an interference pattern, which would mean that electrons weren’t individual particles, even though it was easily provable that electrons behaved like particles.

So, essentially, the reason why the heavy molecules passing through the slits was significant is that we can now check that off of the list of things that could one day help us fully understand quantum physics without just saying “quantum physics, you know?”