Donald Trump Is Back on His Hydroxychloroquine B.S. 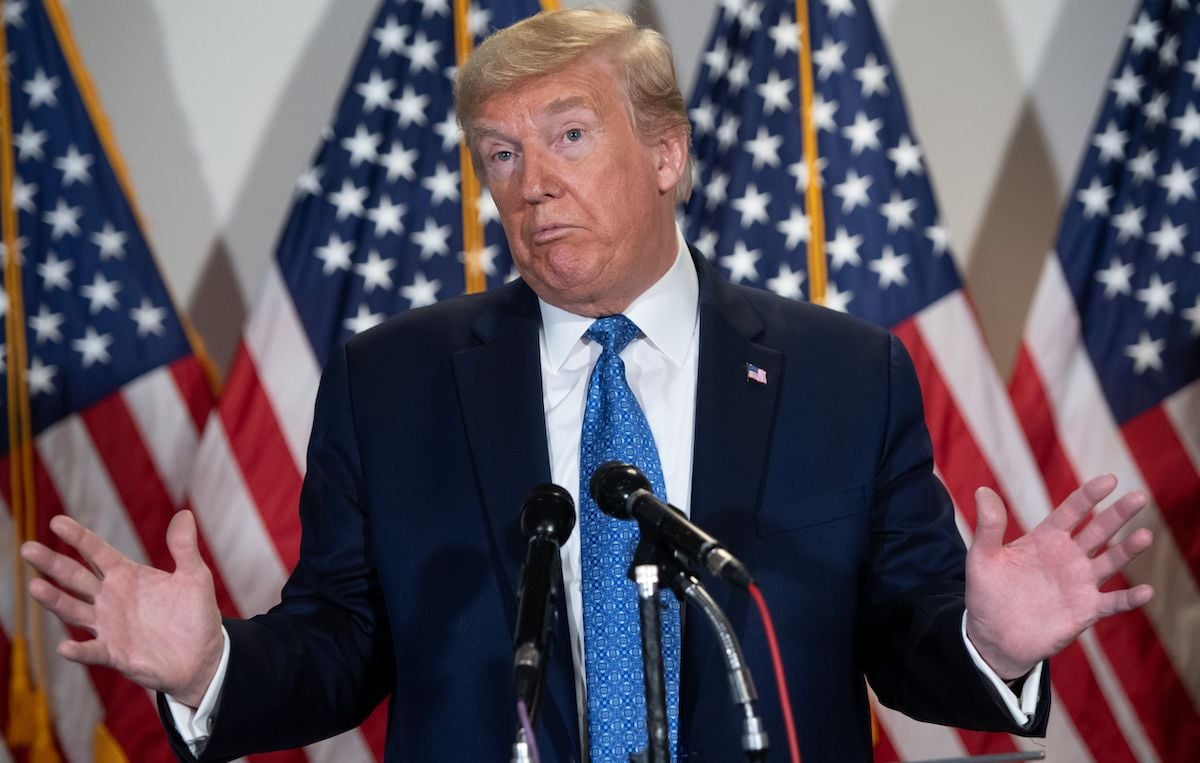 Donald Trump had temporarily stopped pushing hydroxychloroquine as a potential coronavirus treatment after it came out that he and some of his top supporters had a financial stake in the drug and also after people started dying in large numbers during clinical testing. But now he’s back on the subject, telling reporters Monday that he’s taking the drug himself and has been for a number of weeks.

Trump claimed that the medication is popular among front-line medical workers and that he’s “heard a lot of good stories” about it. “And if it is not good, I will tell you right. I’m not going to get hurt by it. It has been around for 40 years for malaria, for lupus, for other things.”

Here’s part of Trump’s rambly and dangerous comments in their only palatable form: as reenacted by comedian Sarah Cooper.

Trump seemed to see his admission as some sort of “gotcha” moment, telling reporters “I was just waiting to see your eyes light up when I said this.” Which is a very strange approach to such a serious topic—he is, after all talking about a virus that has killed more than 90,000 people in the U.S. so far.

But also, why wouldn’t reporters be shocked by his statements? Even Fox News’ Neil Cavuto is like, please don’t do this, this is a terrible idea.

Fox News’s Neil Cavuto is stunned by Trump’s announcement that he’s taking hydroxychloroquine: “If you are in a risky population here, and you are taking this as a preventative treatment … it will kill you. I cannot stress enough. This will kill you.” pic.twitter.com/e6D5alfAgc

Some are arguing that Trump should be allowed to take the drug if he wants to, either because, as Trump himself keeps saying, he has “nothing to lose” or because he deserves what he gets if he keeps going against medical professionals’ advice.

Trump says he’s taking Hydroxychloroquine. It’s a leading story today. He often acts like a toddler, but he’s an adult. If he wants to take a drug w/serious side effects, including causing heart and kidney issues, let him!

If he wants to wash it down with Lysol, that’s fine too.

At least, I think that’s what Bill O’Reilly is arguing here. It’s genuinely hard to tell.

Barack Obama said he used cocaine in high school and the press didn’t care. So why the angst against President Trump for taking hydroxychloroquine? If the remedy is useless, so what? Why do they care?

But of course this isn’t just about Trump, it’s about the millions of people who see him taking potentially dangerous drugs and refusing to wear a mask and internalize the message being sent: that this crisis is not real, the experts don’t know anything, and that nothing can really hurt them.

(Plus, even if it were just about Trump, if he’s going to actively and willfully put himself in danger then I say we should get to stop contributing our tax dollars to his secret service detail. If he’s not going to protect himself, why should we? That only seems fair, doesn’t it?)

Additionally, the drug has some very serious side effects that aren’t exactly ideal for a president to subject himself to.

Side effects of hydroxychloroquine include paranoia, hallucinations and psychosis https://t.co/CVuH9QeI7p

Of course, all of this is assuming Trump is actually telling the truth about taking hydroxychloroquine. The statement released by Trump’s physician was incredibly vague. He said that he and Trump discussed it and “concluded the potential benefit from treatment outweighed the relative risks” and that he will “continue to monitor the myriad studies investigating potential COVID-19 therapies.” It didn’t actually say Trump was taking the medication.

JUST IN: WH Physician issues memo on President Trump’s use of hydroxychloriquine. “We concluded the potential benefit from treatment outweighed the relative risks.” No mention of zinc or a Azithromycin. #COVID19 pic.twitter.com/P1022qnquN

At a press conference Tuesday, Trump’s press secretary Kayleigh McEnany said Trump was taking the medication but when asked why the doctor’s statement was so vague, she seemed to backtrack, saying only that “the president should be taken at his word” and that “the president said himself he’s taking it, that’s a given fact, he said it.” Meaning it is a fact that he said it, not necessarily a fact that he was being honest.

The FDA has strongly warned people against using hydroxychloroquine for COVID-19 treatment or prevention outside of a hospital or clinical trial setting because of the incredibly dangerous complications that can arise. Whether Trump is putting himself in danger or just encouraging the rest of the country to do so, his behavior is brazenly irresponsible either way.

By the way, Trump has been on a “retaliatory purge” (as the Washington Post put it) of public servants with roles in the investigations into his and his allies possible misconduct. So just in case you were wondering if there might be anything Trump was looking to distract us from, there is! There always is.