Donald Trump Doesn’t Understand How Fire Works. Or Trees. Or Anything. 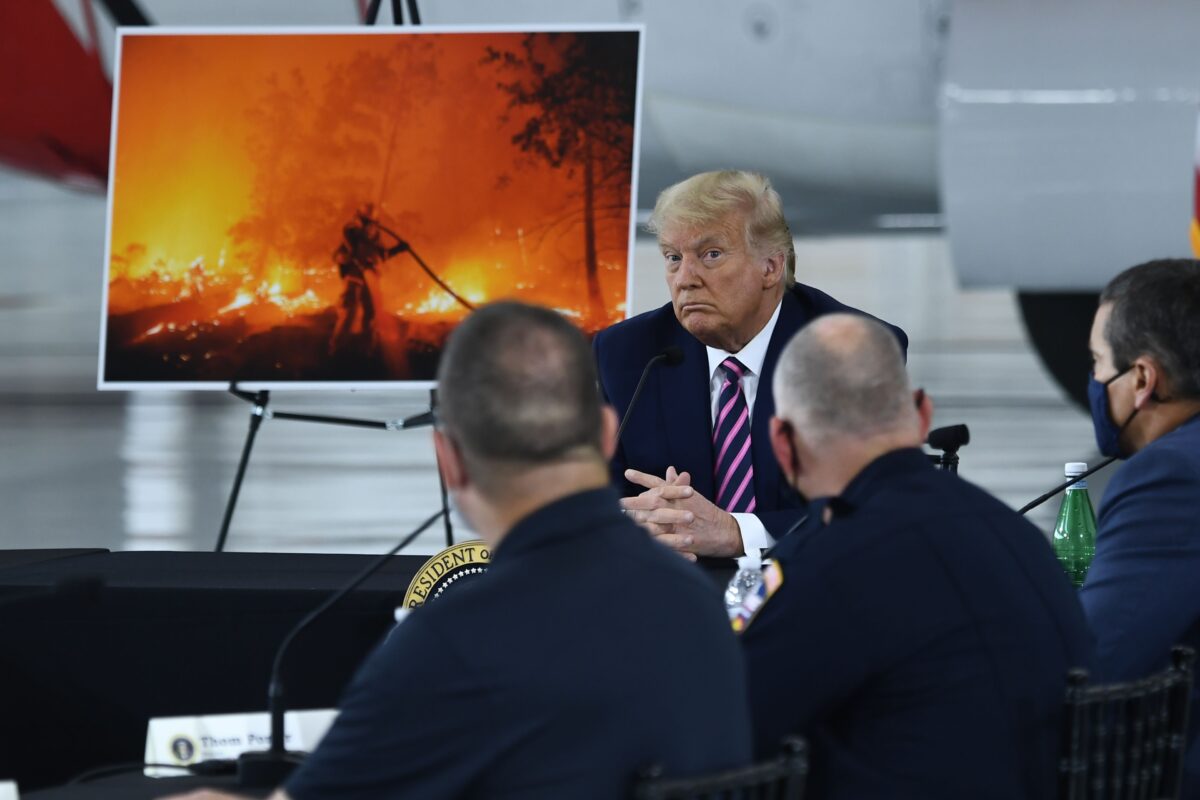 After months of watching him mishandle and play down the coronavirus (despite knowing how dangerous it was), one would think we would all be used to Donald Trump ignoring science, empathy, logic, and reality when it comes to a major disaster here in the United States. But no. Every day is more horrifying than the last, and today, as Donald Trump was briefed on the wildfires in California, he showed, once again, that his ignorance, smugness, cruelty, and heartlessness know no bounds.

Trump started out with blaming the fires, not on climate change or human factors but on … exploding trees.

“They can explode” — Trump’s attempt to explain how poor forest management leads to wildfires is totally beyond parody pic.twitter.com/8yYmJ7lR8O

Just to be completely clear here: that is not how fires work. That’s not how trees work! Exploding trees don’t cause forest fires or wildfires. I can’t believe I have to explain that. But apparently it’s been a myth on the right for a while, based on the fact that some trees can “explode” during a fire. But they don’t cause it. This is seemingly part of an effort to blame these sorts of fires on the forest mangers at a state level and leftist tree huggers rather than on climate change.

But don’t tell Donald Trump that. He’s far more interested in just peddling more crap and blaming poor “forest management,” which I think is code for not selling enough trees for timber. And can I just say: there’s nothing more infuriating than the President of the United States peddling lies and seeming not to care about the fires in my own state, and on top of that, not even pronouncing “Oregon” correctly.

Trump is in California mispronouncing “Oregon” and insisting that wildfires are caused be poor forest management pic.twitter.com/zydXDoe3DT

Many of the fires that are still burning and devastating the entire west coast were started by lightning, others by downed powerlines, among other things, but exploding trees were not a cause. And that lightning, and the high winds that downed powerlines and carried the fires, as well as the record temperatures and lack of rain that made these precious forests into tinderboxes? Again: climate change.

But it gets worse. So much worse.

As Trump was briefed by California officials, he was told, point-blank, that this has to do with climate change. It wasn’t down to vegetation management. And his response: to dismiss it completely. To the faces of the people who are battling these catastrophic fires in California, he just smirked, shrugged, and said “It’ll start getting cooler.”

“We’ve had temperatures explode this summer… If we ignore the science and put our heads in the sand, we’re not going to succeed.”

“I wish science agreed with you.”

“I don’t think science knows, actually.” Yes, it does, you ignorant monster.

You can’t make a virus go away by lying to the public, reducing testing, and saying that one day it will disappear like a miracle. You can fight wildfires and climate change by saying that it’ll just get cooler and that the global consensus of science is wrong. You do not know better, Donnie, in fact, you don’t seem to know a damn thing, and worse, you don’t seem to care that you’re ignorance and denialism is literally killing this nation.

On the one hand, it’s shameful that Trump is visiting only California to be briefed on this disaster, when Oregon too is on fire, facing the worst air quality in the world. But on the other hand: good. A man that has so little respect for the people of this state (as he’s shown in his racist and fascist response to the Black Lives Matter protests in Portland) is absolutely not welcome here.