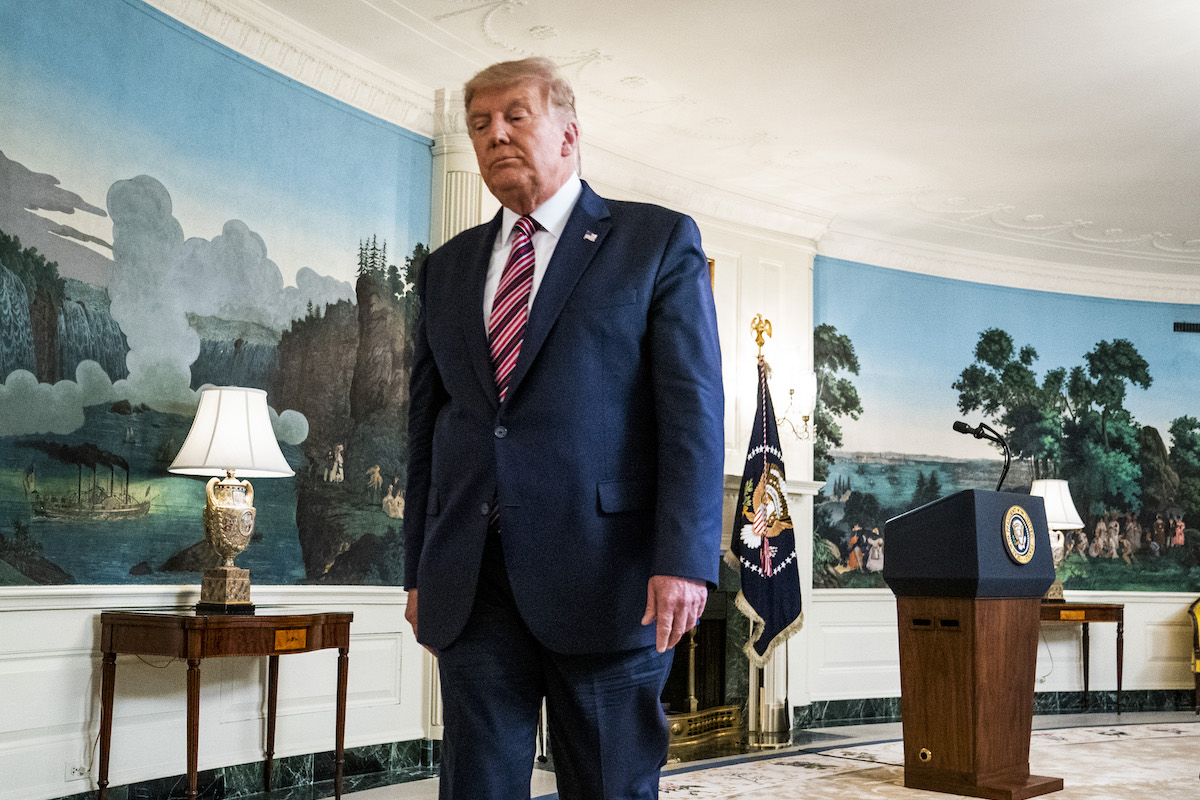 Legendary journalist Bob Woodward has a new book on the way and this time, Donald Trump sat with him for a series of 18 separate interviews, reportedly as an attempt to make himself look better than how he came off in Woodward’s last book, Fear. He was not successful.

Among the many damning things Trump said to Woodward on the record, on tape, was just how much he knew about the dangers of the coronavirus before that information went public, and that he planned all along to downplay that danger.

On February 7, Trump told Woodward the novel coronavirus was “deadly stuff” and “more deadly than even your strenuous flu.”

On February 9 (as well as multiple times after that, in press briefings, interviews, and on Twitter), Trump dismissively compared the 15 cases of COVID-19 that had been reported in the U.S. at the time to the flu, which “kills from 25,000 people to 69,000 people a year” in this country. Later that month, he said the virus would “just disappear” one day. He called it a “hoax.”

On March 19, days after he declared a national emergency, Trump told Woodward he kept information hidden from the public.

“I wanted to always play it down,” he said. “I still like playing it down, because I don’t want to create a panic.”

I don’t know why Trump thought he could say all of this to a journalist and not come off looking like a complete monster. His administration, amazingly (if predictably) is still trying to deny that he said these things, despite the fact that Woodward released the audio of these interviews.

This video of @PressSec saying Trump never downplayed COVID against Trump saying on tape that he intentionally downplayed COVID is everything you need to know about this administration. #TrumpKnew

That’s Trump’s press secretary Kayleigh McEnany, who, on her first day of the job promised reporters she would never lie to them, indignantly claiming Trump “never downplayed the virus”—which is a lie.

“Alright. That was the Press Secretary at the White House lying.” #TrumpKnewpic.twitter.com/s4nO42qTAP

That Trump knew about the virus and downplayed the risks is not new information, but it is kind of shocking to hear the audio of him saying these things with no hesitation. What’s also infuriating is that Bob Woodward pulled a John Bolton and kept all of this to himself for the purposes of putting it in a book, rather than see it as information the public had a right to have access to immediately.

Trump admitted to Bob Woodward in February that he was downplaying the deadliness of COVID. We’re just finding out about this today, after hundreds of thousands of Americans have died. How is this good book publishing or good citizenship?

Maybe if bob woodward had come forward with what he knew immediately, 190K Americans wouldn’t be dead.

This country is sick. The ruling class is sick. Journalism is dying a slow death because everyone wants access and book deals.

We are about to see a LOT of people put out books and reveal wild shit that should have been revealed the second it was said and done!!!!!!!!!!

A few months ago I [77M] found out that someone [74M] who I was talking to was lying about something. I didn’t tell anyone back then but I told everyone now. It might be possible that some people may have died, but he was the one who lied & didn’t fix it. AITA?