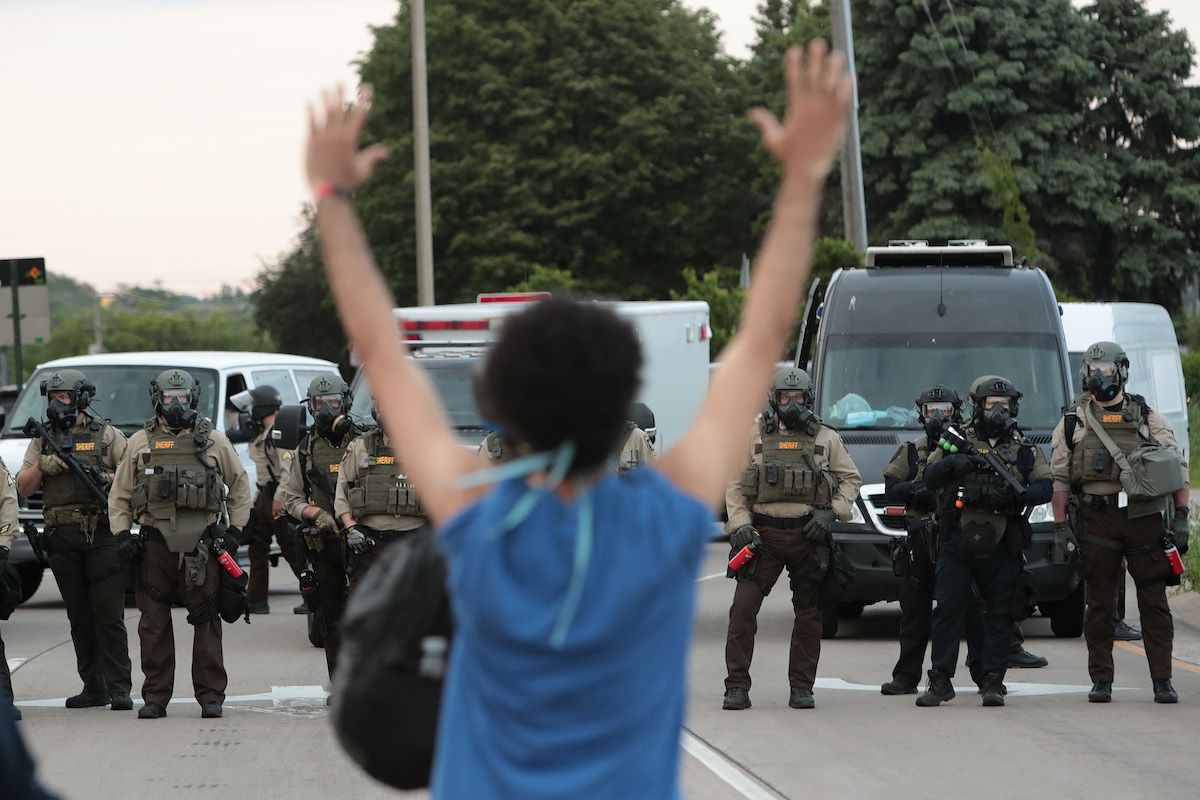 Donald Trump took to Twitter Sunday to declare that “the United States of America will be designating ANTIFA as a Terrorist Organization.”

This tweet came after nearly a week of protests across the country and abroad in response to the police’s killing of George Floyd (and countless other Black people). Many of the peaceful demonstrations turned violent, with a number of elements at play. There’s been a lot of media focus on violent protesters and lootings, as well as the “outside forces,” both domestic and foreign, that might be responsible for that violence—which, while “outside agitators” very well might have been present, the focus on them is an oversimplification that discounts legitimate local anger.

Despite the narrative that Black protesters are destroying their own cities, we’ve actually seen countless instances of communities defending their spaces. “It’s important to note, of course, that property destruction can hurt the very constituencies that riots and uprisings are supposed to speak for. The loss of small minority-owned businesses, social centres and local amenities further impoverishes communities,” Rebecca Traister wrote in an essay published on The Guardian today. “Here, it’s worth noting that I’ve read accounts of residents of Minneapolis trying to put out fires and otherwise protect property in their own neighbourhoods, only to be attacked by police as they did so.”

Above everything, the biggest source of violence at all these protests was the outsized police forces using tear, gas, rubber bullets, and other aggressive weaponry on the crowds as a means to “protect” their cities from property damage.

the fact that quarantines were lifted to open businesses, and curfews are enforced to protect businesses, is pretty revealing about what does and doesn’t matter to the elite.

Basically, the violence that erupted across the country this weekend is a complicated issue. But Trump is focusing the entirety of the blame on one and only one thing: Antifa. AKA anti-fascists. The people who want to fight violent fascism by any means necessary, including violence. Blaming them for violence is like fighting the flu by criminalizing sneezing. They are a reaction to a problem.

Antifa are the ones stopping the terrorists, actually. pic.twitter.com/vPzqMVoe9y

Friendly reminder that “ANTIFA” is short for “anti-fascism.” Fascism is a form of authoritarian ultranationalism characterized by dictatorial power, forcible suppression of opposition. Y’know, the opposite of freedom, liberty, and independence. Fascism is a bad thing. Fight it.

The President of the United States has officially declared those who oppose fascism to be the enemy. pic.twitter.com/EkxTSGiHXO

Is Antifa part of Obamagate? Just trying to keep up.

Activists have been trying to get a domestic terrorism law introduced for years as a way to fight white supremacy and gun violence, but they haven’t had any success on that front. Now Trump is trying to establish one solely to go after Antifa after a few days of violence between police and numerous groups that might have included those identifying as Antifa—even though, according to law enforcement across the country, both far-right and far-left extremists were involved in the violence and property damage.

It’s not clear yet what Trump’s unconstitutional terrorism declaration will mean moving forward, although Attorney General Bill Barr backed up the statement. “The violence instigated and carried out by antifa and other similar groups in connection with the rioting is domestic terrorism and will be treated accordingly,” he said Sunday.

Trump has declared Antifa to be 100% responsible for the violence (both against property and people) this weekend, despite a total lack of evidence to support that claim. By doing so, he’s lumping all protesters—peaceful or not—together under the same extremist left banner. This opens the door to labeling any sort of dissent as extremism. If that sounds like a leap, take a quick scroll through Trump’s Twitter timeline, where he has repeatedly attacked the media as well as Democrat leaders nationwide for offering any narrative other than the one he’s hammering.

Terrorism is an inherently political label, easily abused and misused.

Let’s be clear: There is no legal authority for designating a domestic group. Any such designation would raise significant due process and First Amendment concerns. https://t.co/SJpT7sHs4p

Trump just took a giant step toward fascism. If only there were some sort of group opposed to that …