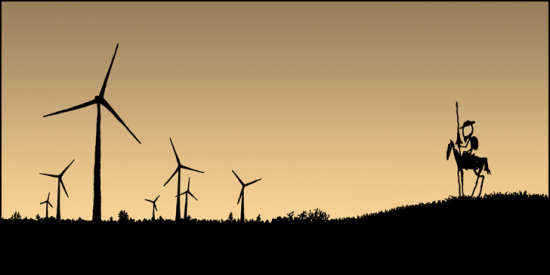 Yes, you read that right. And yes, it means everything that you don’t want it to mean.  Fresh off the success of Sherlock Holmes, Warner Brothers is looking for other literary adventure stories to bring to the big screen, but they apparently decided that whores, dementia, and futile struggle was too depressing, and what would be really cool was if Don Quixote of La Mancha was an actual hero who fought actual monsters.

Producer Joel Silver – the Hollywood powerhouse behind (you guessed it) Sherlock Holmes – is teaming up with Warner Bros. to create a “Pirates of the Caribbean-style swashbuckling version of the story” for modern-day moviegoers.

In case you haven’t read (or absorbed through cultural diffusion the plot of) The Ingenious Hidalgo Don Quixote of La Mancha, it’s about a penniless Spanish gentleman, who, several hundred years out of date and after reading a great number of novels, decides to become a chivalrous knight.  Essentially everyone around him decides that he has gone crazy, and his adventures of attempting acts of charity and justice invariably end in beatings, cruel tricks, and other misfortunes for both him and those he tries to help.

It is a story about a crazy man who does nothing but good, and the sane people around him who are never anything but cruel.

You know goes well with that sort of thing?  Explosions.  You know those windmills.  Highly flammable.

However, this cinematic incarnation of Don Quixote will not portray its titular character as a madman who chases windmills, but instead as a tried-and-true hero who does battle against an actual fantasy world of monsters and demons.

Say what you want about the quality of adaptation in Sherlock Holmes: at least he solved mysteries.  He didn’t, you know, travel through space.  Or perform genetic experiments on sheep.

It’s as if someone made a movie called I, Robot where robots could kill people even though they were programmed with the Three Laws, and the idea of a highly advanced computer intelligence organizing the fate of mankind was seen as sinister instead of simply the next step in our evolution.

(picture via XKCD, story via ScreenRant.)