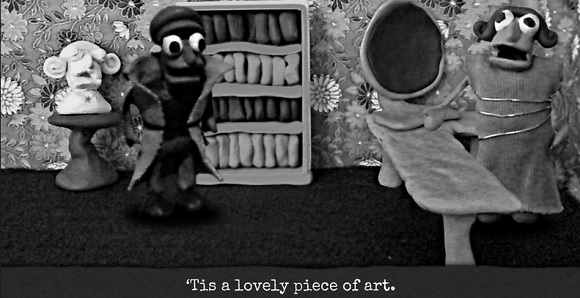 Typically, when I’m looking for a new game to play, I do a bit of research first. I watch trailers and gameplay previews. I read interviews with developers. If it’s a game that’s already out and I’m not reviewing it, I look up reviews elsewhere. But when Dominique Pamplemousse crossed my radar (thanks to the slew of IGF nominations it picked up), the only pitch I needed was the quote on its website.

Dominique Pamplemousse in “It’s All Over Once The Fat Lady Sings!” is a unique and offbeat stop motion animated detective adventure game about gender and the economy. Also, all the characters frequently burst into song.

I’m not sure why this is, but my funny bone has a real liking for anything that puts a lot of effort into looking half-assed. The characters in Dominique’s world are lumpy, waddling weirdos who stand slack-jawed and wide-eyed when awaiting their turn to speak. The clay and cardboard backgrounds are equally rough around the edges, disguising the time and care behind them. Everyone sings, as advertised, but don’t go in expecting Sondheim. The melodies are infinitely repetitive, the meter questionable, the singing delivered with off-key exuberance. “Gotta search the room, try to find somethin’ that’ll tell me somethin’ about Devon and this thing she’s got with Casey Bynghaaaam,” Dominique croons. So the song begins, and ends. As someone in the habit of making up silly ballads on the spot, I felt kinship here. Even the end credits — including every single first name of the game’s crowdfunding supporters — are immortalized in song. And yet, the intended effect belies the skill that went into this game. Writing songs that can be endlessly looped and filled with expository dialogue is no small task. It’s all the more commendable when you consider that everything from the design to the voices is the work of lone developer Deirdra Kiai. Talk about versatility.

The plot is as cheeky as the music, embellishing the mystery of a vanished pop star with real-life Twitter clues, unexpected bagpipes, and disparaging remarks about auto-tune. It’s a simple game, and a short one (my playthrough lasted just under an hour and a half). The gameplay is easy point-and-click fare — find a thing, ask the right questions, puzzle your way out of tricky situations. From top to bottom, this is a good ol’ fashioned mystery.

Except that it’s not. Dominique Pamplemousse may have the fixings of a classic gumshoe tale, but there’s a whole lot of subversion going on. The most obvious example is our eponymous hero/ine, who identifies as non-binary. Dominique’s main concerns are pressing, sensible things: Why were they hired for such a big case? Will they get paid before they get kicked out of their crummy apartment? Are they ever going to crawl out from under their student loans? All wise things to wonder! The other characters, however, have different priorities.

That failure to categorize is a constant hang-up for the people Dominique encounters, and its presentation highlights its ridiculousness. Rather than making Dominique’s gender the focal point, the game centers on what should be the most important thing — the mystery. As Dominique follows leads and ponders evidence, the others tie themselves in knots over what pronouns to use (not that Dominique is ever asked). Dominique’s professional role in things is never the first order of business. It’s always the boy-or-girl question, which reveals nothing about who Dominique is or what they’re capable of. Dominique deals with it admirably, making it clear that this the speaker’s problem, not their own, then guiding the conversation back to what’s actually at hand. By portraying Dominique as a competent, likable individual with bigger fish to fry, what are you? comes across as rightfully irrelevant.

The layers present in the supporting cast are more oblique (it is, after all, a ninety-minute game), but they, too, play around with detective story tropes. There’s treachery and plot twists aplenty, but the dramatis personae isn’t what I’ve come to expect after a lifetime of mystery novels and police procedurals. Female characters are prominent here, but there’s not a prostitute, scorned woman, or femme fatale to be found. If I had to boil this game down to one phrase, it’d be this: Don’t judge a book by its cover.

What makes Dominique Pamplemousse work is its effortless subtlety. The more time I spend unpacking this game, the more I’m impressed by how much thought went into it. But though the commentary on gender expectations was evident as I played, that wasn’t what drew me in. Dominique Pamplemousse is bonkers in the best possible way. I don’t think I ever stopped smiling. Whenever I started to feel that I’d had my fill of endless singing, an operatic exclamation would get me laughing again. Games that Have Things To Say often do so with a straight, solemn face, but Dominique Pamplemousse takes great delight in being irreverent. I have a feeling that the oddball humor may be a love-it-or-hate-it affair, but there’s something to be said for a game so committed to having a good time. Come on, it seems to say, beckoning you with an infectious grin. Let’s goof off for a while. Let’s have fun.

Dominique Pamplemousse in “It’s All Over Once The Fat Lady Sings!” can be purchased straight from the developer and is available for Windows, Mac, and iPad. A free browser-based demo is also available.