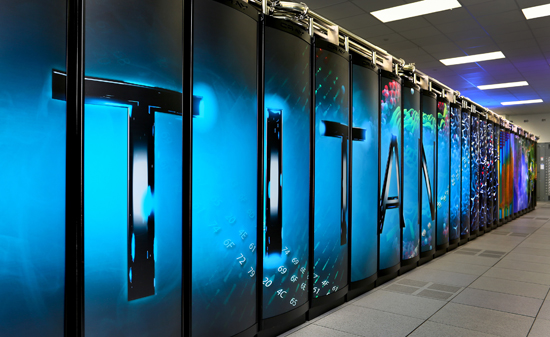 Though it only usurped the title of world’s fastest supercomputer this summer, IBM’s Sequoia might have already met its match. The Department of Energy’s Oak Ridge National Laboratory today powered up their latest and greatest supercomputer: Titan. If the name alone doesn’t do it for you, perhaps the fact that Titan is ten times more powerful than its immediate predecessor will. The supercomputer’s set to provide its massive computing ability to issues like climate change, but it can probably also play a mean game of Solitaire.

Ars Technica breaks it down:

Based on the Cray XK7 system, Titan consists of 18,688 computing nodes, each with an AMD Opteron 6274 processor and an NVIDA Tesla K20 GPU accelerator. The NVIDA GPUs provide most of the computing horsepower for simulations, with the Opteron cores managing them. True to its name, Titan is big—it takes up 4,352 square feet of floorspace in ORNL’s National Center for Computational Sciences.

It might not be Skynet, but it’s about as close as we’ve come yet. We hope to use its power for good, though, like Boromir. If that’s not enough references for you, this video includes all the sounds from the Titan unit found in Command & Conquer 3: Kane’s Wrath. You’re welcome.