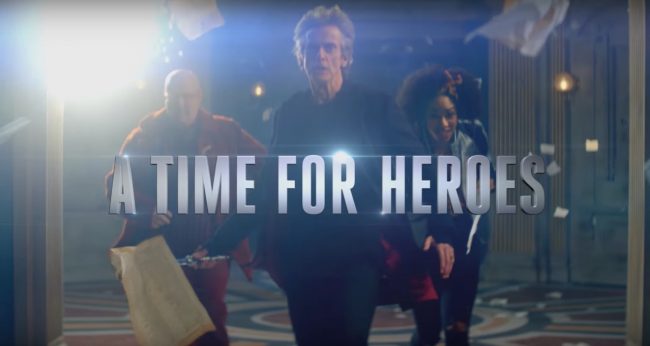 This new trailer for Doctor Who‘s upcoming tenth season is short, sweet, and ends on a particularly teasery note that’s sure to give fans of Peter Capaldi’s Doctor a few heart palpitations.

Clocking in at only 30 seconds, the trailer (probably more accurately called a teaser) does exactly what a good trailer does: it doesn’t reveal too damn much. Yeah, I’m looking at you, Spider-Man: Homecoming. The whole thing is packed with smash cuts of some particularly exciting-looking moments from the upcoming season, including more than a few shots of Michelle Gomez as Missy looking all dark and intimidating inside the Tardis.

I think I also spot some really classic Cybermen costume designs, so you know there’s going to be at least one throwback episode here. And, of course, the classic Doctor Who standbys are all present as well: space bugs, aliens, medieval warriors, ye olde England, space stations, and strangely empty, sterile futuristic places with robot helpers (that speak emoji, nonetheless).

As we all know, this season will be Capaldi’s last as the Doctor, and this trailer doesn’t let you forget it, either: it closes on a really quick shot of him looking like he’s not doing too hot, as his hand starts to sparkle with some of that good old regeneration energy. This of course isn’t the first time we’ve seen that energy pop up outside of a full-on regeneration, but it’s never really a good sign that we see it at all. So you know, things aren’t looking too good for the Doctor here.

Of course, this more than likely isn’t his regeneration scene, as Capaldi’s official last show is the Christmas special, airing this December. They haven’t filmed that yet at all (at least, that’s what they say), so the best we can expect from the season leading up to Christmas is a reference or two to why he’s starting to lose his shit.

You can catch the premiere of the new season this April 15th on BBC America.