I wonder why they dismantle and rebuild the TARDIS on set when they could just materialize it? Seems like that would save on shipping and labor. Anyway, shooting has begun on the 50th Anniversary episode of Doctor Who, and you all should know what that means: British paparazzi snaps of the set! Anybody who isn’t into looking at spoilers that I suppose could be major plot points but are probably pretty mild and will eventually be revealed in press should look no further.

On Monday, the BBC treated us to our first picture of Matt Smith and David Tennant on the job at the episode’s script read through. Yesterday, they posted this picture: 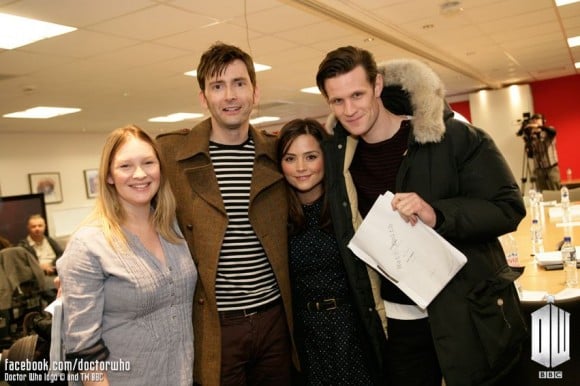 Featuring Smith, Tennant, Jenna-Louise Coleman and newcomer Joanna Page, who had not previously been announced as a part of the show’s cast. And now, courtesy the Daily Mirror, we’ve got a look at Page on set, looking quite regal indeed: 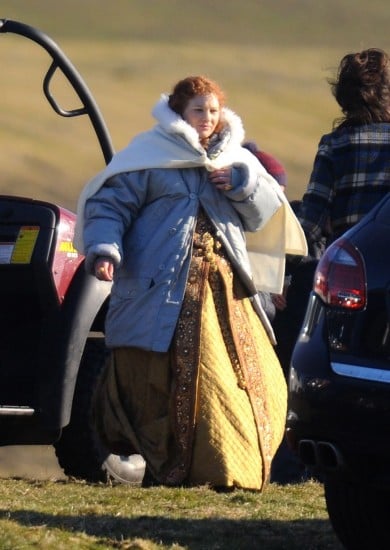 Now, there’s a coat covering her costume so admittedly once we see it in the show things could look quite different. But with the striking red hair and gold gown, it’s hard not to make the connection to one of England’s most badass monarchs, Queen Elizabeth I, in her coronation gown. Whether Page turns out to be human or alien, I’m sure she’ll have a pretty interesting role in the special. But as of right now? I’m putting my hopes in Liz the First. And her albatross wings.

(First and second picture via The Daily Mirror, story via Bleeding Cool.)