Turns out anyone can just ask the Empire State Building to change its color. 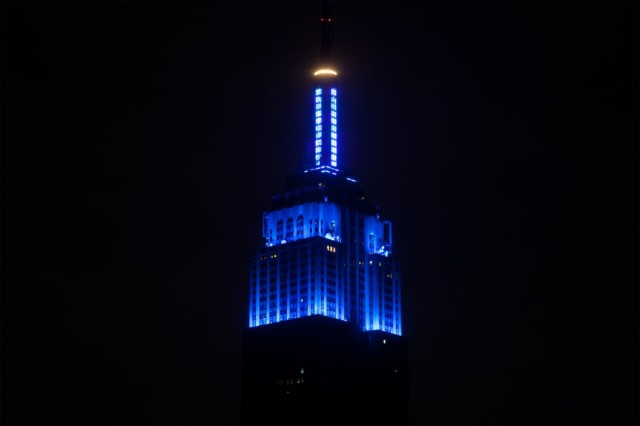 The iconic Empire State Building here in New York City changes the color of its lights at the top of the building to celebrate certain occasions. As far as we know it’s never celebrated Doctor Who, and fans of the show want that to change. Someone has started a Change.org petition to get the building lit up TARDIS blue on November 23rd.

The petition is aimed at the company that owns the Empire State Building, and at the time of this writing is at 30,917 signatures with a goal of 35,000. The petitioners have already filed the official application with the company for the lighting, but they think a petition would be a good show of support. Couldn’t hurt.

In their explanation, the petitioners say they don’t believe the Empire State Building has ever been lit to celebrate a science fiction show. It was lit green in 2009 to celebrate the 25th anniversary of Teenage Mutant Ninja Turtles, but we can’t think of any other examples off hand.

We happen to be in New York, so if the petitioners get their way and the building is lit up like the TARDIS we’ll do our best to get some photos for you on the 23rd. We know the Empire State Building can be lit in a variety of colors, but what we want to know is can the light at the top slowly pulse while loudspeakers play that whooshing noise?