Doctor Who Christmas Specials, Ranked in Order of Greatness | The Mary Sue

The Doctor Who Christmas Specials, Ranked in Order of Greatness 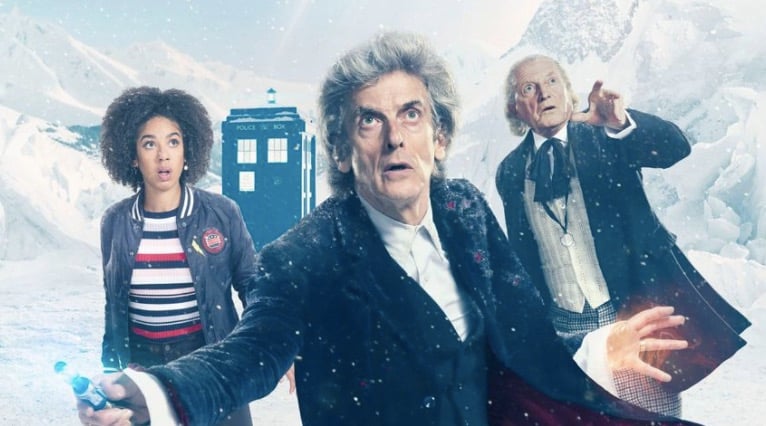 Doctor Who fans like myself always have a little extra to look forward to this time of year, thanks to the BBC and its annual Doctor Who Christmas special.

The special has been a tradition for little over a decade now; this year’s, “Twice Upon a Time,” will mark the 13th time Whovians’ Christmases have been brightened by an appearance from the Doctor. (Although episodes like 1965’s “The Feast of Seven” or Episode 3 of Season 1’s “The Unquiet Dead” are festive, they don’t officially hold the title of Christmas special.)

If you’re looking to get caught up on past specials before this Christmas, join me in taking a trip down memory lane with this list of the best Doctor Who Christmas specials, ranked from my least favorite special to the special I consider the greatest. Allons-y! 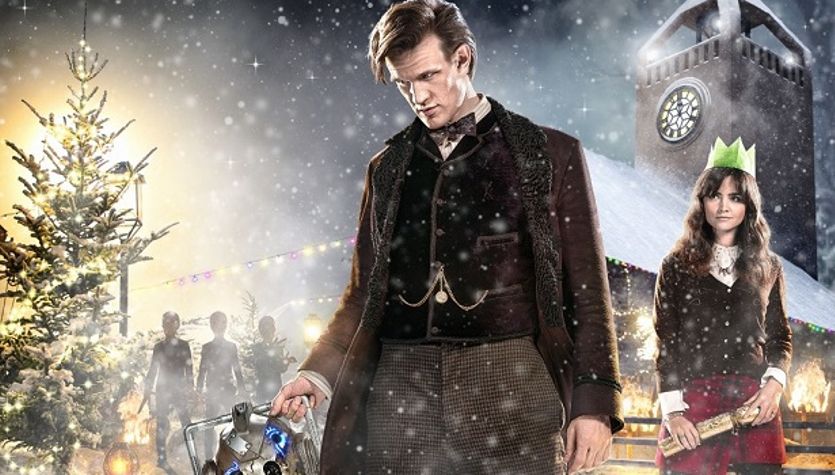 “The Time of the Doctor” marked Matt Smith’s final episode ever as the Eleventh Doctor. Unfortunately, the episode itself is convoluted and slow-moving, which is why this special ranks last on the list for me. Its dragging pace is a shame considering what a great Doctor Matt Smith made—he deserved a better send-off.

The episode focuses on the Doctor defending a town called Christmas for 300 years, but the narrative’s emotional weight is undermined by dragging plot and placing. Still, if you need a little Matt Smith in your holiday—and who doesn’t?—”The Time of the Doctor” might be worth checking out for him alone.

RELATED: 15 Great Time Travel Movies Worth Being Present For

“The Doctor, the Widow, and the Wardrobe” is an obvious take on the C.S. Lewis classic The Lion, The Witch, and The Wardrobe. In this special, the Doctor takes an unusual liking to a  World War II-era family and leaves a space-bending present under their Christmas tree. The giant present sends the family to a wintery planet where pine trees lay enormous Christmas ornaments that hatch angry, Groot-like tree people.

The special’s writer Steven Moffat intended this to be the most “Christmassy” episode of Doctor Who ever, and it shows. Unfortunately, the overarching plot never truly feels cohesive. 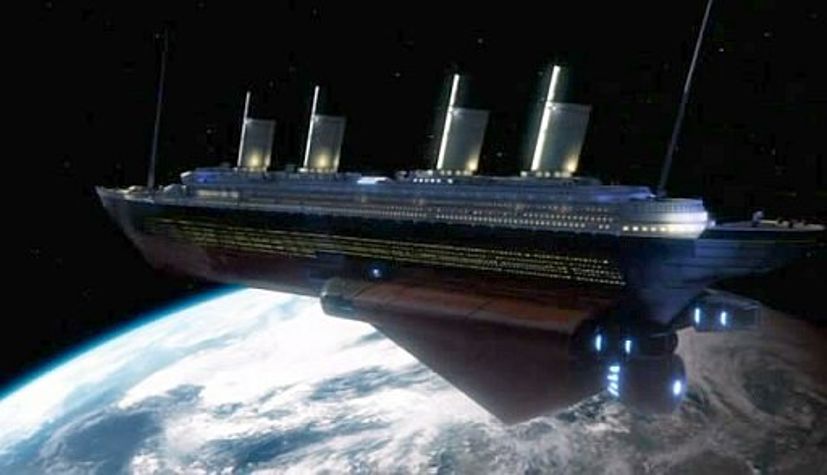 “Voyage of the Damned” had the dubious distinction of being the only Doctor Who episode to get a public reprimand from the last living survivor of the Titanicdisaster. When it came out in 2007, 95-year-old Millvina Dean argued that the special, which features the Titanic breaching the walls of the TARDIS, capitalized on a real catastrophe.

“Voyage of the Damned” also holds the highest viewership of any Doctor Who episode to date, possibly because it features Kylie Minogue as the Doctor’s companion Astrid Peth.

Although it’s easy to get emotionally invested in Astrid’s character arc, things get real melodramatic in the special’s later act, complete with slow motion shots and an almost laughable scene where the Doctor is whisked away by angels—hence “Voyage of the Damned”‘s low spot on this list. 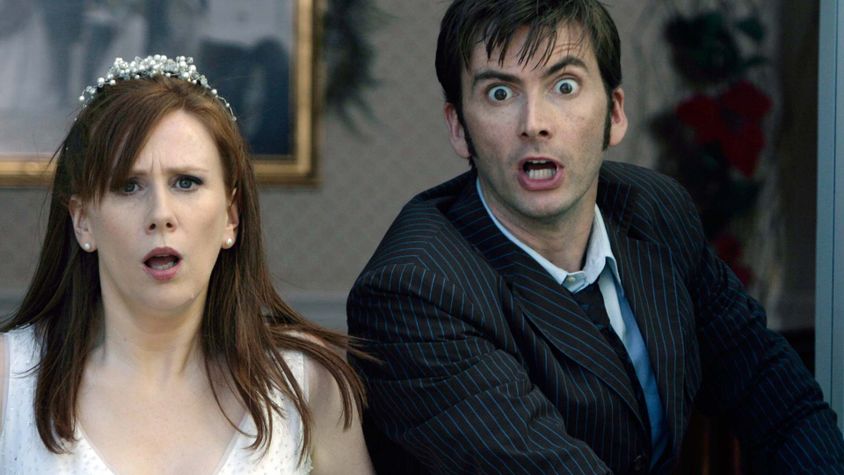 As a fan of the character Donna Noble, played by Catherine Tate, part of me hates to put this special so low on the list—but as significant as “Runaway Bride” is for Donna’s character arc, as a Christmas episode, it’s only so-so. (Spoilers for the second series of Doctor Who to follow!)

The episode takes place immediately after the end of the episode “Doomsday,” in which the Doctor loses his companion, Rose Tyler. Although it’s understandable that the Doctor would still be distraught over the loss of Rose, his seriousness in this special doesn’t really match Donna’s intense energy.

Like many episodes starring Catherine Tate as the Doctor’s companion, “Runaway Bride” has a somewhat sillier vibe than most of Doctor Who, as Donna—who suddenly finds herself in the TARDIS, on the day she was meant to be married—tries to return home. Unlike Rose and many of the other companions who come to love traveling with the Doctor, Donna spends most of this episode wanting to just go back to her regular, mundane life.

RELATED: The 13th Doctor Can Teach Us a Lot About Being Human 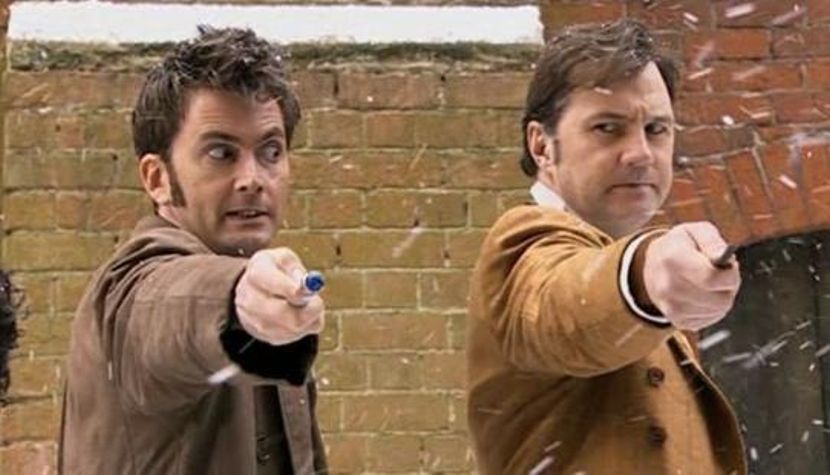 This special might not be everyone’s cup of tea, but personally I think “The Next Doctor” is a fun little Christmas mystery.

In it, David Morrissey, probably known most recently for playing The Governor on The Walking Dead, stars as a man from the Victorian Era who claims to be the next regeneration of The Doctor.

“The Next Doctor” is particularly notable for featuring a fun battle against the Cybermen, one of my favorite of the Doctor’s foes. 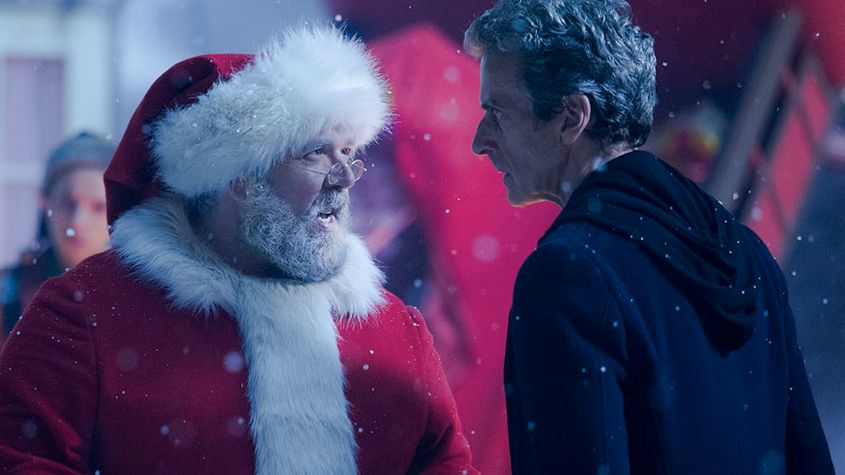 “Last Christmas” might be the special with the most emphasis on Christmas themes.

This episode was also Peter Capaldi’s first official go as The Doctor in a Christmas special, and teamed him up with Nick Frost (beloved by many a geek for his roles in movies like Shaun of the Dead and Hot Fuzz).

Frost plays Santa Claus, who is manifested in the minds of the Doctor and his companion Clara Oswald by dream-inducing parasites.

This episode was initially supposed to be the final farewell between the Doctor and Clara, but actress Jenna Coleman had a change of heart at the last minute and decided to stay for one more season.

6. “The Return of Doctor Mysterio” 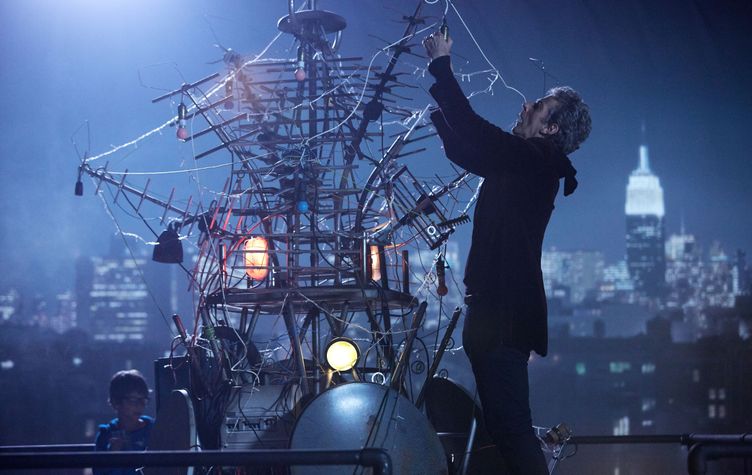 Although mostly lacking the emotional punch of the higher-ranked Christmas specials on this list, The Return of Doctor Mysterio is a fun, charming special that combines the appeal of superhero stories with classic Who timey-wimeyness.

The episode features Capaldi’s Twelfth Doctor returning to modern-day New York, where he teams up with a young man he initially met (and accidentally imbued with superhero-like powers) over a decade ago. 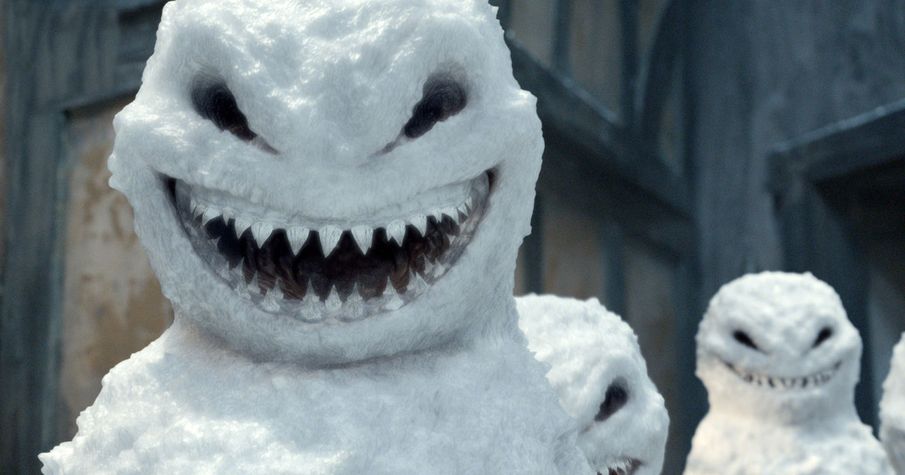 “The Snowmen” introduces the Impossible Girl, Clara Oswald, as the Doctor’s new companion. In this episode, The Doctor and his friends are attacked by a group of murderous snowmen who are composed of psychic ice that can animate itself.

The episode also brings back an old villain, the Great Intelligence—voiced this time by the incomparable Sir Ian McKellen—who first appeared in  the 1967 episode “The Abominable Snowmen.”

If you like the scarier episodes of Doctor Who, such as 2005’s “Blink”, you’ll almost certainly like “The Snowmen” as well.

4. “The Husbands of River Song” 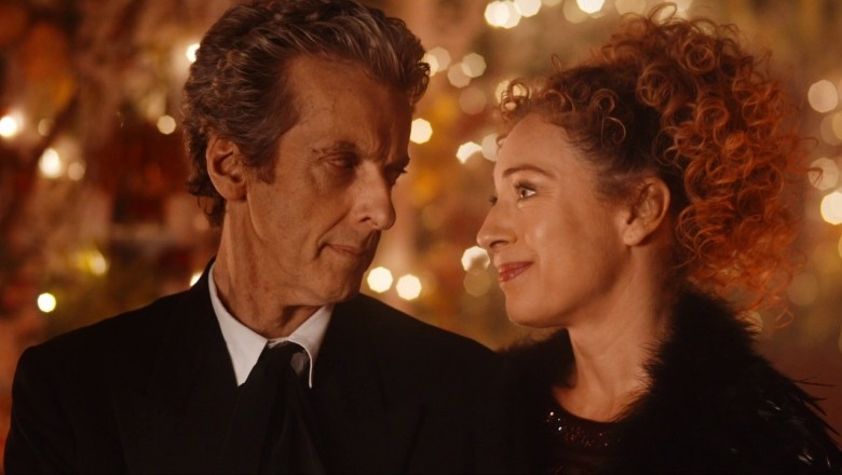 2015’s Christmas special featured the always-welcome return of River Song, played by Alex Kingston. River is really the closest thing the Doctor has to a love interest, and this episode is a proper ending to a beautiful love story that has lasted throughout time and space. If you’re a hopeless romantic, you’ll need a box of tissues ready as the Doctor and River say their final goodbyes. 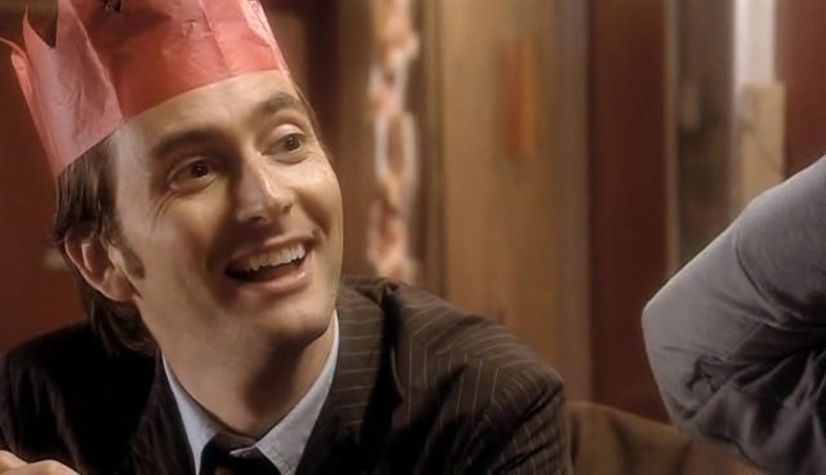 “The Christmas Invasion” was Doctor Who’s first official Christmas special. It was also the first full episode to star David Tennant as the 10th Doctor after Chris Eccleston’s departure from the series. Tennant would go on to become arguably one of the most beloved Doctor’s ever.

The episode is a little weak towards the first half, partially because The Doctor is in a coma for much of it, but the rest of the special resembles a low-budget Roland Emmerich movie—and I mean that in a good way!

“The Christmas Invasion” has it all: an alien army that attacks Earth and rains destruction all over England; killer Santas; murderous Christmas trees; and a climactic sword fight. It’s really not one to be missed! 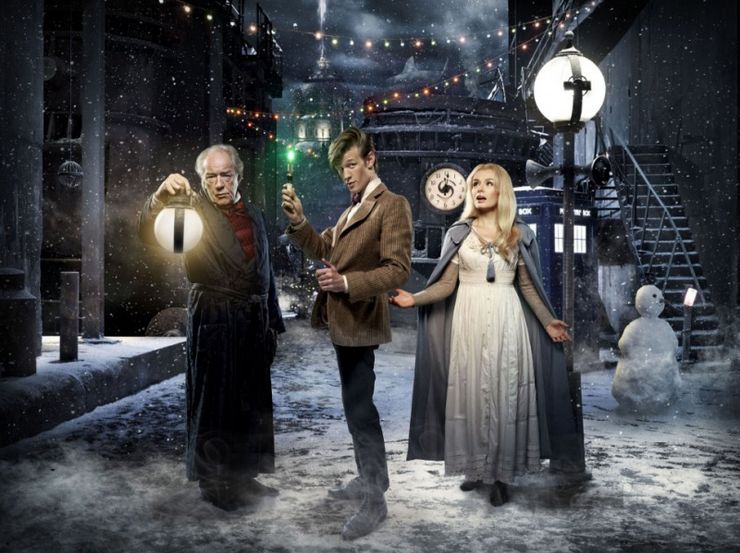 As the episode’s title implies, this special is a retelling of the Charles Dickens classic. And, much like its source material, it’s a beautiful story that celebrates the Christmas tradition of giving.

When the Doctor’s friends Amy and Rory are in peril of crashing on an out of control space liner, he implores a crotchety old miser named Sardick to save them. When Sardick refuses, the Doctor devises a plan to fix the Scrooge’s past in order to warm his heart in the present.

“A Christmas Carol” is a fantastic episode that really captures the core message of Doctor Who: that love is a stronger force than greed. 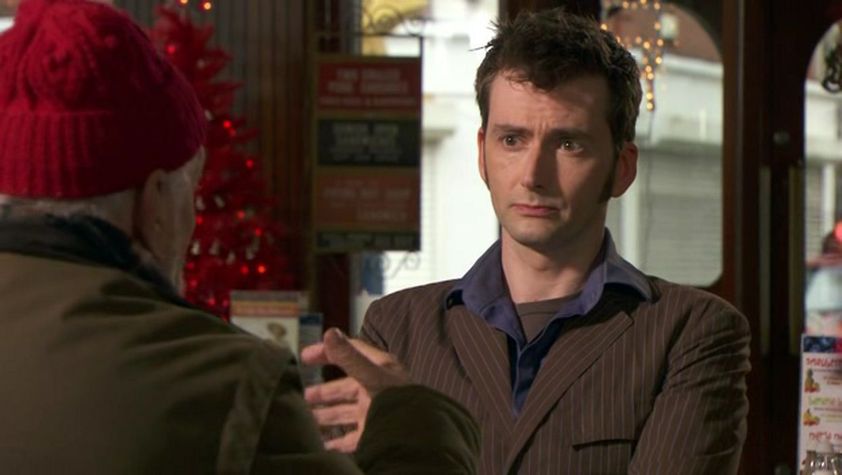 “The End of Time” is noteworthy in that it was the final episode for actor David Tennant as the Tenth Doctor, as well as the last episode written by showrunner Russell T. Davies.

This fantastic two-part special gives us an epic confrontation between the Doctor and his eternal rival, the Master, and also brings together virtually every character of note from the previous five seasons.

David Tennant’s heart-wrenching goodbye in this episode feels more like a farewell to the audience than to his past companions. It’s an absolutely beautiful send off for a fantastic actor who gave audiences probably the most vulnerable and caring Doctor the series has ever had.