Well? Isn't anyone going to ask, "What is it with the glasses?" 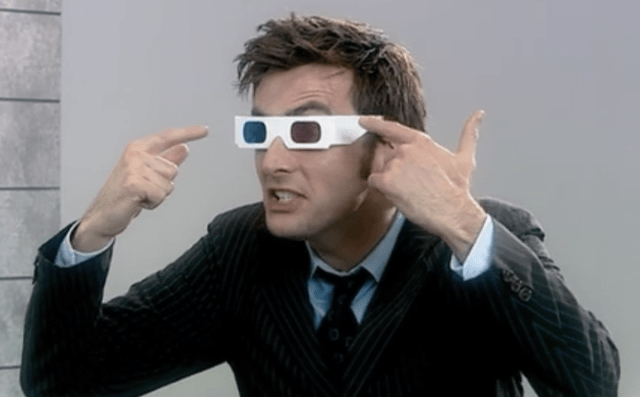 Rejoice, the fans who waited! Your prayers have been answered. You were praying that the Doctor Who 50th anniversary special “Day of the Doctor” would be shown in US movie theaters, right? We sure were.

[UPDATE] The USA theater locations have been announced. Tickets on sale October 25.

On November 23, “Day of the Doctor” will be shown in 3D on movie screens in 8 countries including the US. We can only imagine how mad the other countries are going to be when they find out.

On the Doctor Who website, there is a theater locator to find one near you. It doesn’t look like they’ve got the US locations nailed down yet, but the excitement that it’s coming here at all is almost too much to bear.

They’re going to add more locations to the map over the coming weeks, so be sure to check often for your chance to make googly eyes at a giant, 3D David Tennant and Matt Smith. Check carefully, as not all theaters will show the special simultaneously.

Did we mention that this is one of the greatest things that has ever happened? It’s fantastic.

(via Talkbacker, image via BBC)