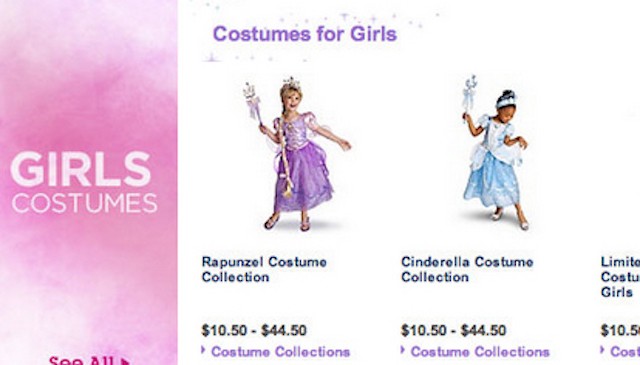 It looks like Target isn’t the only retailer pushing away from the gender gap; Now Disney is stepping up to the challenge.

Every year around Halloween, Disney Store has released their collections of costumes for children. They come with themes such as 2013’s “Who Are You?” and 2014’s “I Am.” Only problem is that, for years, they have been separated by gender in highlighted sections labeled “Boys Costumes” in blue and “Girls Costumes” in pink as seen in this 2013 screenshot from their website: 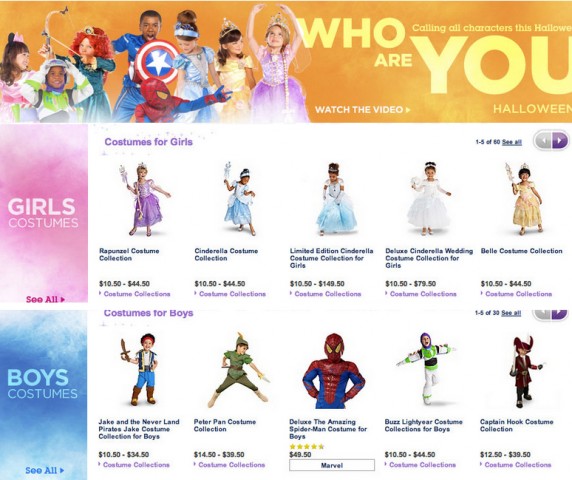 Items listed as “Peter Pan Costume Collection for Boys” or “Belle Costume Collection for Girls” barring children of different genders from being characters they might like to dress up as. Halloween is supposed to be the one time a year anyone can be whoever they want regardless of who they are. Girls should be superheroes if they want and boys should be princesses if they want. Now, a label shouldn’t keep someone from being what they want, but the label and suggestion often influences parents to steer clear of certain items due to their child’s gender.

However, in 2015, Disney Store has made a big change. Now, all of the costumes are listed together and labeled simply as “for Kids.” We’ve got “Cinderella Deluxe Costume for Kids,” “Ultimate Spider-Man Costume for Kids” and many more, completely removing the gender bar and allowing the kids to pick and choose as they please, free from influence. 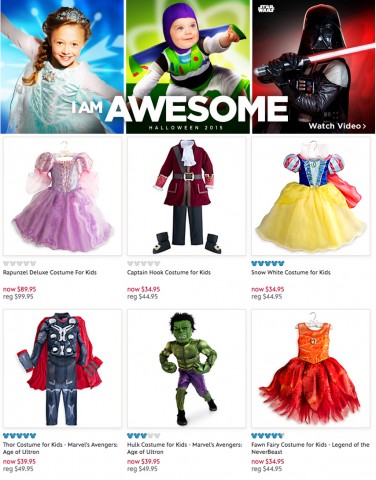 Not only that, but Disney Store has begun listing products such as “Star Wars,” “Marvel’s The Avengers” and action figures under toys for young girls. This may be due to internet backlash for Disney’s distinct lack of Black Widow during the release of the Avengers, including from Avengers actor Mark Ruffalo.

The new line of costumes is titled “I Am Awesome” and we think Disney Store is pretty awesome for taking a step in the right direction.

Damian Alexander is a journalist and writer/illustrator of children’s stories. He has written articles for BuzzFeed, runs the blog Gay Movies That Don’t Suckand can be caught blogging on tumblr at DamiAnimated. His fiction and artwork can be found at DamiAnimation.com.