Disney Thankfully Pulled This Racist Moana Costume From Their Store 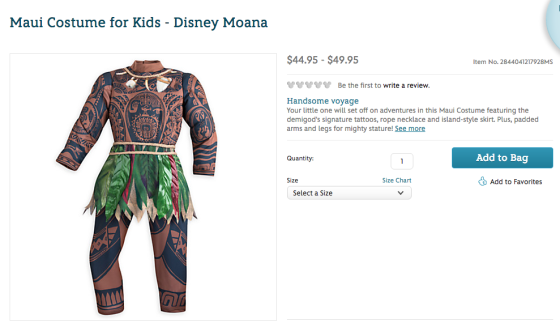 Halloween is not a holiday that evokes cultural sensitivity, but considering the diverse team and the positive attention Moana has been receiving in anticipation for Disney’s first Polynesian princess, the Maui costume that recently appeared on the Disney Store raised some eyebrows. The costume, along with a wig you can purchase separately, allows children to don the demi-god’s brown skin, rope necklace, and skirt. The ocean is calling, and it’s like, “dude, no.”

Maui’s appearance has been somewhat controversial, as some, including Samoan athlete Eliota Fuimanono Sapolu and Will Ilolahia from the Pacific Island Media Association, have commented on how his weight perpetuates negative stereotypes. Still, I think everyone can agree that making Maui’s brown skin and tattoos a costume to wear was a horrible, horrible idea that should have been squashed early on. Especially considering how often Polynesian tattoos, which often have cultural significance and symbolic meanings, are appropriated, this costume should have never made it to the store.

The Daily Dot points out that the store has a Moana costume that doesn’t include a brown skin suit, which is a welcome alternative. It’s baffling that the Maui costume didn’t get shut down way earlier, but it’s good to see it’s no longer on the site.

(via TIME, Image via Disney Store)
Want more stories like this? Become a subscriber and support the site!