Is Disney Putting the Kibosh on Princess Movies? 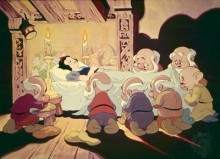 The spurning of a legacy, or a sign of the times? According to a recent Los Angeles Times report, Disney’s soon-to-be-released Tangled, notable for being the company’s 50th animated feature film, marks a major shift in the entertainment company’s strategy: Away from princesses, and towards more “gender-neutral,” male-friendly entertainment.

Reportedly miffed that 2009’s The Princess and the Frog failed to be the megahit that it had hoped for (despite grossing more than $250 million worldwide on a $104 production million budget) on account of its overfocus on younger girls, Disney is said to be trying to bring “boys, teenagers and adults to the theater,” with a “romantic male lead as a wise-cracking thief who mixes it up with bandits and beer-swilling thugs.”

But it’s not just that Disney wants to bring more boys into the fold. What girls want has changed as well, thanks to the likes of, well, The Disney Channel:

With the advent of “tween” TV, the tiara-wearing ideal of femininity has been supplanted by new adolescent role models such as the Disney Channel’s Selena Gomez and Nickelodeon’s Miranda Cosgrove.

“By the time they’re 5 or 6, they’re not interested in being princesses,” said Dafna Lemish, chairwoman of the radio and TV department at Southern Illinois University and an expert in the role of media in children’s lives. “They’re interested in being hot, in being cool. Clearly, they see this is what society values.”

The thing is, Disney features have been far from the Sleeping Beauty model of tiara-sporting damseldom for quite a while: ’90s movies like Pocahontas and Mulan weren’t immune to cultural critique, but they did star strong female leading characters. I haven’t seen Princess and the Frog, but from what I gather, it did as well; putting “Princess” in the title of a movie may well be a marketing mistake, but it seems odd that Disney should retreat from a winning, even iconic formula which has already shown itself willing to adapt to the times on account of one hiccup.