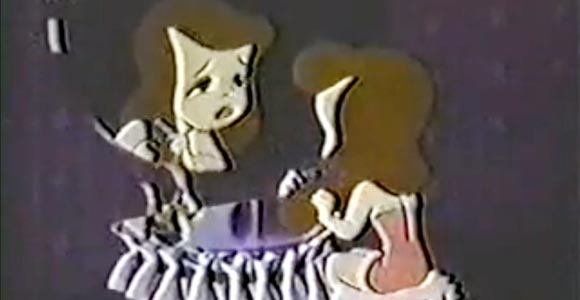 No, this video from 1946 isn’t perfect as far as feminism goes but I have to say, I’m surprised to find it so…not 1946? Though I guess I’m even more surprised Walt Disney Productions made a video about our periods at all.

The animated film is about ten minutes long and was sponsored by Kotex. As you may have guessed, it was shown in American schools. (Presumably only to girls because boys are not supposed to know periods even exist.) That being said, it’s quite the film.

According to Wikipedia, “Gynecologist Mason Hohn was hired as a consultant to ensure that the film was scientifically accurate. Hohn was hired to increase the likelihood that school doctors and nurses would allow the film to be shown. Hohn’s involvement led to a stronger emphasis on biology than other marketing by ICCC [International Cello-Cotton Company]. The Story of Menstruation increased its reputation when it received the Good Housekeeping Seal of Approval.”

Along with the video, students were given a booklet titled “Very Personally Yours” filled with tips for what to do that time of the month but also discouraged the use of tampons, and as you’ll see when you watch, gave very specific hygiene advice. They also gloss over the whole “blood” thing and don’t ever mention sex (though I could say it’s implied in the dance portion). However, it includes an important message for young girls – having your period doesn’t make you weird. Not to mention some very positive things are said about body image and it might have been the first film to use the word “vagina.”

But perhaps the best part of the animation is the animation itself. It depicts ladies doing all those activities tampon commercials have come to love showing taking part in; biking, horseback riding, but throws in inexplicable feats of strength. Give it a watch.