You're no match for Mulan and Minnie, big guy. 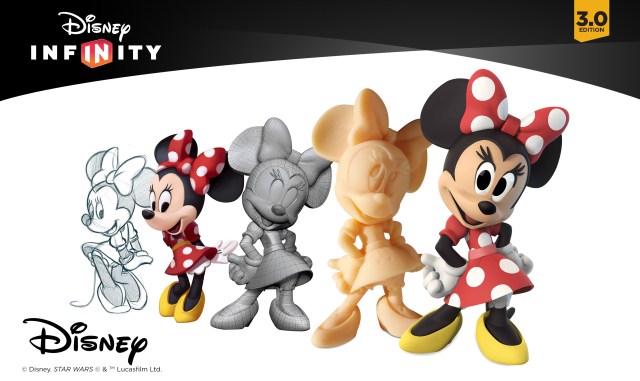 In addition to Leia, Ahsoka Tano, Quorra, Mulan and the Inside Out gang, the  updated lineup also includes a very rad Minnie Mouse. Disney Infinity designer Jeff Bunker spoke to The Mary Sue about adapting the iconic Minnie character, staying true to strong female characters in-game, and kicking butt as The Incredibles‘ Violet.

The Mary Sue: What prompted the Disney Infinity team to debut Minnie?

Jeff Bunker: The funny thing about that was, we had already done Mickey and Donald, and we pride ourselves on the female characters that we have. Rapunzel, Violet, Helen…We’d done Mickey and Donald Duck, so we knew that if we ever did “Red Pants Mickey,” it was a given that Minnie would be included for that. We were excited that the corporate brand within Disney was asking us to do Mickey and Minnie, which is a good sign. If people are wanting to have their characters in our game then we’re doing something right. It was fun to have them approach us, that gave us a lot of confidence.

TMS: Obviously there’s been a ton of excitement surrounding the Star Wars additions, I know I’m really excited about Mulan as well, so there are a ton of great playable female characters that we’re getting in addition to what we already had. What makes Minnie stand out?

Bunker: There’s something a little bit more weighty about Minnie, just because she’s practically as old as Mickey. I think she was designed at the same time as Mickey was, back in 1928 or ’29, and in a very real way she’s part of Disney’s legacy almost as much. And then the other thing, she’s played a lot of different parts. She’s played in so many shorts and TV shows and short films, so unlike characters like Rapunzel and Mulan and Helen and Quorra, who have one movie they’ve participated in, she’s more of a role player like Mickey is, so that gives her a wider range of what we can do with her, which is really helpful in a video game.

Bunker: It’s important to me that we’re capturing the true version of that character. In the case of Mulan, there was some discussion of maybe we should do the warrior version of her where she’s in her Ping outfit, since we’re more of an action adventure game, those clothes would actually animate better. But for me, that wasn’t Mulan, that’s Ping. That’s Mulan not being true to herself, that’s her being somebody that she’s not. We wanted to pick Mulan where she’s being herself and kicking butt, so that dress that she has in our figure is the one she wears at the end when she saves the Emperor, that’s the true identity of that character. Generally in all the women that we’re doing, we try to find that moment where they are themselves, they’re not trying to be somebody that they’re not.

The other fun thing about it is with a character like Jasmine, because of the Toy Box Gameplay, we want you to be interactive with each other and the environment, all the characters are more physical than they are in the films. But we still want to do it in a powerful but feminine way, and it’s really fun to see Jasmine kick butt on Hulk, but do it in her way, you know, Jasmine brings up the dust devils with the magic carpets, she’s athletic, and it’s fun to watch the girls play with these characters because I think they’re not used to playing with their princesses in this way where they kick butt, so its kind of a fun twist that were putting on the characters. We definitely want to animate them in a way so they don’t feel like they’re out of character, but they’re obviously more active than they are in the film.

TMS: We’ve spoken to the Disney Infinity team in the past about how obviously young girls are really excited that they’re able to play as female characters, but I know male gamers have also responded well to characters like Jasmine. Was that a surprise for you?

Bunker: The funny thing about that is that by the time the game was released to the public we weren’t surprised by that, because internally when we were play-testing those games, we were being drawn to playing those characters ourselves. From the very first characters like Violet, she’s still one of my favorite characters to play as, she’s super powerful and has cool effects, and I like to play as Jasmine. So we were finding internally in our own studio that we would have thought we’d be drawn to playing the boy characters, we found that we were having just as much fun with the female characters, so it was encouraging to see that what we were experiencing is just how the public receives the female characters.