Paleontologist Wants to Hatch a Dinosaur | The Mary Sue

Someone Wants to Try Hatching a Dinosaur 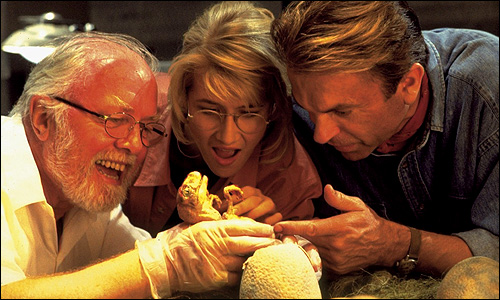 First off, Dr. Grant was right — dinosaurs did evolve into birds, birds are descended from dinosaurs. And now, there is a scientist who thinks he can “hatch” a dinosaur-like creature. Not by extracting prehistoric DNA from a mosquito, but by identifying a certain gene in a chicken that allows it to grow with a tail. Well, at least he didn’t pick something that could turn into a velociraptor.

Here is the mission: “All we’re trying to do right now is just figure out the simplest way to make a chicken or any bird look like a dinosaur.”

You know, your typical day at the office.

Getting back to the whole “bird” thing, one of the major reasons paleontologists say that dinosaurs are related to birds (besides their overall skeletal structure) is that while developing as an embryo, birds have a pronounced tail that eventually disappears. Paleontologist Jack Horner described to Wired his plans to try and manipulate the DNA of a chicken so that the phase at which the tail disappears is skipped over. If a chicken is allowed to hatch without that crucial developmental cue, would it develop to look like some kind of dinosaur? Or just a chicken with a tail (which is also pretty weird)?

The whole point is to actually see what’s involved in the transformation between dinosaurs and birds — to see what happened. When the embryo is growing, it starts producing a tail. But what happens is, a gene turns on — at least this is our hypothesis — that actually resorbs the tail, gets rid of it, during embryo genesis. The same thing happens with humans. We start growing a tail, and then, it’s probably the same gene [that is in the chicken], turns on and resorbs that tail.

As fascinating as this experiment is, Horner acknowledges that it may not be the most hard-pressing scientific breakthrough of our time — unless you’re a fan of evolution.