The men's rights activist sinks to a ghoulish new low. 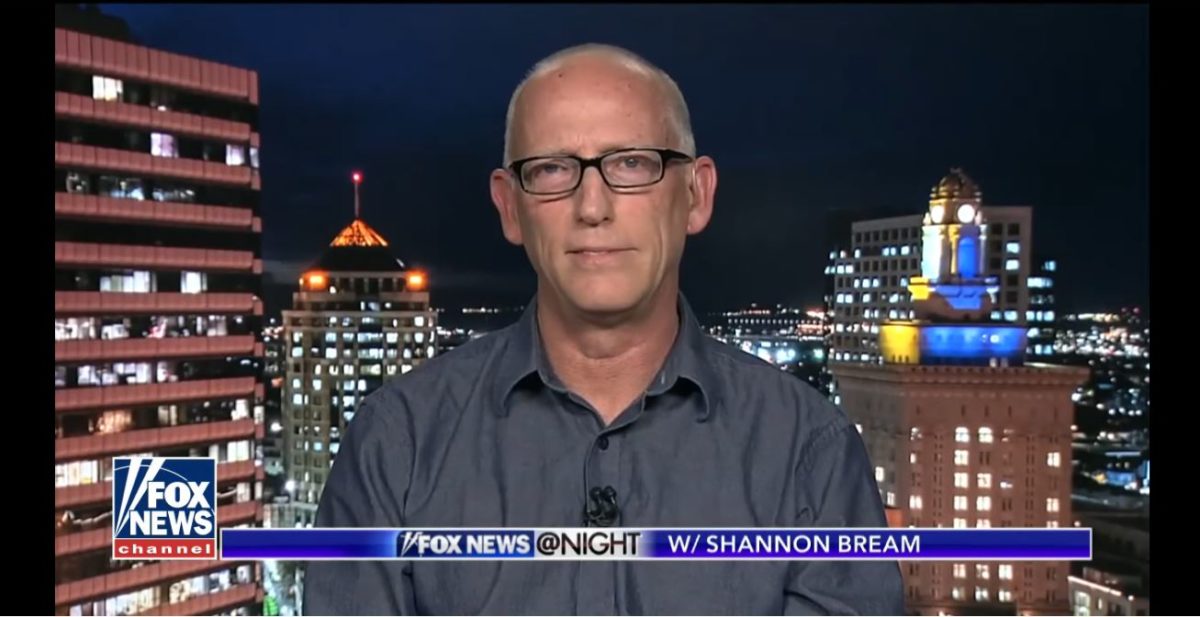 Last night, a gunman killed three people and wounded 12 at the Gilroy Garlic Festival in Northern California. It’s yet another in a series of horrific mass shootings plaguing our country that seem to happen on a weekly basis. As often happens after a tragedy like this, many people took to social media to express their condolences to the families of the victims and outrage at a government that refuses to do anything to prevent gun violence.

But Dilbert creator Scott Adams didn’t do either of those things. He didn’t offer sympathies or mourn the loss of life, which included a six year old boy. Instead, he chose to use the tragedy as a vehicle to promote his shitty blockchain app Interface:

It’s a news gathering tool, like CNN and FOXNEws (among other uses). No fake outrage necessary. This is one of its intended purposes.

Many on Twitter were quick to call out Adams’ disgusting attempts to profit off of a tragedy:

Dilbert guy Scott Adams is using the garlic festival shooting to direct market mass shooting survivors (at a time when public info on this was that the shooter was still at large) on his app pic.twitter.com/9EgGfSGkuz

Me, yesterday, explaining to @KaylaPekkala why I wanted to spend $3 on the Dilbert guy’s 1996 book: “This man has the most broken of broken brains and lives in an alternate universe and he’s just the absolute worst. I need to see where this began.”

Al Capp: I’ll be remembered for all time as the biggest dingbat ever to draw a popular comic strip!
Scott Adams: Hold my pencil. https://t.co/JNkvYER1Jj

Scott Adams (the Dilbert guy) is hawking his video advisor app as a newsgathering tool to justify using Gilroy shooting and hashtags to promote it. pic.twitter.com/eE1O502K81

wtf is up with this ghoul Scott Adams? pic.twitter.com/XIAjLZjTGG

Adams quickly doubled down on his tweet, comparing his app to real reputable news sources covering the tragedy. In reality, Interface is a for-profit company where witnesses can create an account and then sell their stories to the highest bidder. It’s not journalism, but it is gross and exploitative! It’s bad enough that Adams saw the shooting as a chance to promote his app, but he also appears to think that the survivors of the attack are ready and willing to cash in on their trauma.

So far, the only “expert” to sign onto his app is a troll whose areas of expertise are “Scott Adams being vile, journalism basics, and blockchain scams.”

This isn’t the first time that Adams has attempted to cash in on death. In 2018, he wrote a blog post about his estranged step-son’s alleged opioid overdose. The post quickly devolves into a sales pitch for his app, with detailed instructions on signing up.

Adams has a history of terrible opinions, both as an outspoken men’s rights activist and misogynist who rails against the “American Matriarchy”. Unsurprisingly, he is also a vocal Trump supporter. But while Adams has long been a hateful troll, this attempt to squeeze profits from a tragedy is a disgusting new low.