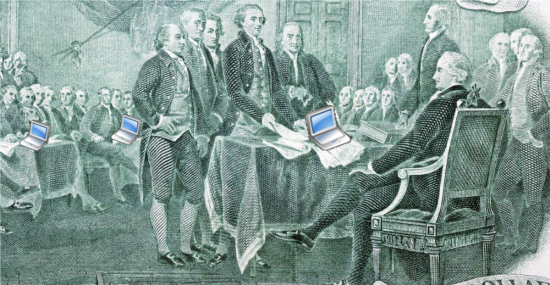 The world of digital law can be a messy place. The Internet is such a new, different medium from anything that has come before it. There are often questions of how laws and rights apply online, and you could argue that a lot of legislation takes advantage of this ambiguity to squash rights and expand power. Rep. Darrell Issa (R-CA) and Sen. Ron Wyden (D-OR) — whom you may remember as being on the right side of the SOPA fight — are aiming to put a stop to this with an updated version of a very traditional weapon. Consider it Bill of Rights 2: Digital Boogaloo.

The “Digital Bill of Rights” was unveiled at the Personal Democracy Forum earlier this week. Like its daddy, this proposed Bill of Rights has 10 items.

1. The right to a free and uncensored Internet.

2. The right to an open, unobstructed Internet.

3. The right to equality on the Internet.

4. The right to gather and participate in online activities.

5. The right to create and collaborate on the Internet.

7. The right to access the Internet equally, regardless of who they are or where they are.

8. The right to freely associate on the Internet.

10. The right to benefit from what they create.

Right on! Rights! Right? Right, but only so long as we write the right rights; so far this is just a framework. Over on KeepTheWebOpen, you can see an evolving version of the Bill and also weigh in with your thoughts. The hope, as far as Issa and Wyden are concerned, is to make this something of a “digital Constitutional convention,” and while that’s a nice thought, you can safely bet your life savings that it won’t ever be taken quite that seriously. I’ll remind you that the actual Bill of Rights is a collection of 10 Constitutional amendments and we haven’t seen one of those since that boring one that got ratified in 1992.

That said, this Digital Bill of Rights seems promising, and it’s nice to see lawmakers coming at digital law from a rights perspective instead of fear-mongering. As some have pointed out, however, it’s going to be important to watch how this progresses (and to be a part of it) considering that point 10 sounds suspiciously like something that could be spun out into new SOPA-like legislation. The sentiment is definitely sound and it does fall at the end of the list, but it’s easy to say how it could fall in direct competition with points one through six.

The greater logic behind the movement remains sound, though. Issa puts the whole thing this way on KeepTheWebOpen:

[W]here can a digital citizen turn for protection against the powerful? This question lay at the heart of the fight to stop SOPA and PIPA and keep the web open. While I do not have all the answers, the remarkable cooperation we witnessed in defense of an open Internet showed me three things. First, government is flying blind, interfering and regulating without understanding even the basics. Second, we have a rare opportunity to give government marching orders on how to treat the Internet, those who use it and the innovation it supports. And third, we must get to work immediately because our opponents are not giving up.

We need to frame a digital Bill of Rights.

Right on. Write on. Rights.