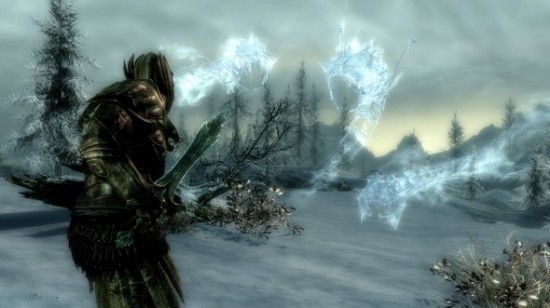 The Elder Scrolls series is, and has always been, one of the most immersive series in video games. When Morrowind first released, I’ll admit, I was too young and my gaming palate to unrefined to enjoy it. About ten minutes in, I realized I could click just about everything and put it into my inventory. That was when I gave up. Years later, I gave Oblivion a shot; older, with my gaming palate more refined. I have never been as immersed in a virtual world as I have been in Oblivion’s, and I played a MUD for fourteen years. Over 200 hours logged in Oblivion, with my character’s skills trained high enough to where he could literally standing jump over a single story building, I never even completed the very first quest. My character still has that amulet in his inventory. So, I was obviously stoked for the next installment in the series, Skyrim. I got the game the day of release, eschewed my daily gym routine, and booked it home straight after work in order to spend the next hour making my character and ignoring the game’s main quest line in order to get lost in the world. It’s been months since the game’s release now, and I only have a few hours logged into my save file. I really hate to admit it, but I just can’t seem to bring myself to play Skyrim. Here’s why.

There are two giant barriers standing between me and Skyrim. The first is that, to be honest, I just don’t have it in me. There’s too much to do. I don’t really have an excuse, either, as that is precisely why I loved Oblivion so much. I made my character in Skyrim, made it beyond the tutorial, did a few cave spelunkings on the way to the first town, got bored in said town, then headed straight to the nearest city. Now that I am there, I can’t play for more than ten minutes at a time. There’s just too much to do, and this is a small city in comparison with some of the other ones in the last game in the series, which released over five years ago.

I know the game world is supposed to be even more immersive than the one found in Oblivion — it is certainly much prettier, which aids immersion, and that’s what I love so much about the series — but for some reason, I just can’t go into every single house and hut anymore, looking for property to steal or a wayward quest or valuable item hidden away in some nondescript corner of a city. “So then, don’t,” you may say, and that’s a pretty fair argument, as Skyrim is set up in such a way where players make their own adventures. The problem, though, is that I can’t do that either. I can’t just pass up that large of a chunk of the game’s content, and because of not being able to pass up said chunk, but not being able to deal with all of it, I’m passing up all of the content by not being able to play the game.

The expansion was very different from the base game. Whereas the base game certainly boasted an enormous, immersive world, it was generic medieval fantasy, full of grey armor and brown trees — and that was fine, for a while. Shivering Isles, however, came along and looked incredible, as if Bethesda decided to make a sci-fi Elder Scrolls game — same immersive world, but it looked alien. 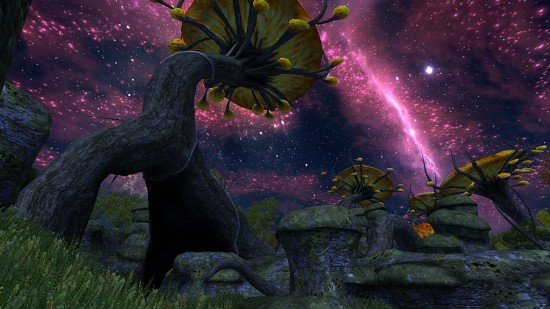 On top of the incredible alien world full of rainbow-colored flora and strange fauna, the NPCs were unique and delivered hilariously insane dialogue. The world of Shivering Isles was split in half, one section being the overly excited, brightly rainbow-colored Mania, and the other half being the depressing, bleak, Tim Burton-esque Dementia. The residents of either territory were out of their minds, providing genuinely funny dialogue and quests more unique than the usual fetch or kill quests the base game had to offer. The architecture found in the world was absurd (in a good way), and exploring the wilderness felt more genuine than exploring the base game’s more realistic wilderness for some reason. I just couldn’t go back to grey armor, brown trees, and a landscape that makes sense.

Four years later, Shivering Isles is now ruining Skyrim for me, like it ruined Oblivion. Just to be clear, it wasn’t so badly done that it ruined the game, it was quite the opposite — it was so good, that I just couldn’t go back. Now, I’m wandering around Skyrim, trying to find the same passion and desire to explore the obviously immersive and gigantic world, but I just can’t. Brown trees? Small huts? A couple grey wolves attacking me while I travel the wilderness? I miss the golden mushrooms towering into the sky, the haunted purple graveyards off in the distance, the lunatic townspeople that want me to steal a regular fork from a museum because they’re insane. Ever since I experienced Shivering Isles, I just can’t seem to deal with Skyrim, a world that has so much to do, but is so very regular. I’m still trying, of course, because Oblivion and the world Bethesda has created this time around has earned Skyrim that much, but man, I really wish townspeople would stop asking me to kill some bandits hiding in a cave, and instead would create an elaborate heist quest wherein I had to infiltrate a silverware museum.